Use of emergency alerts for Marcos’ campaign is meant to derail his candidacy, lawyer says | Inquirer News
Close
menu
search

Use of emergency alerts for Marcos’ campaign is meant to derail his candidacy, lawyer says 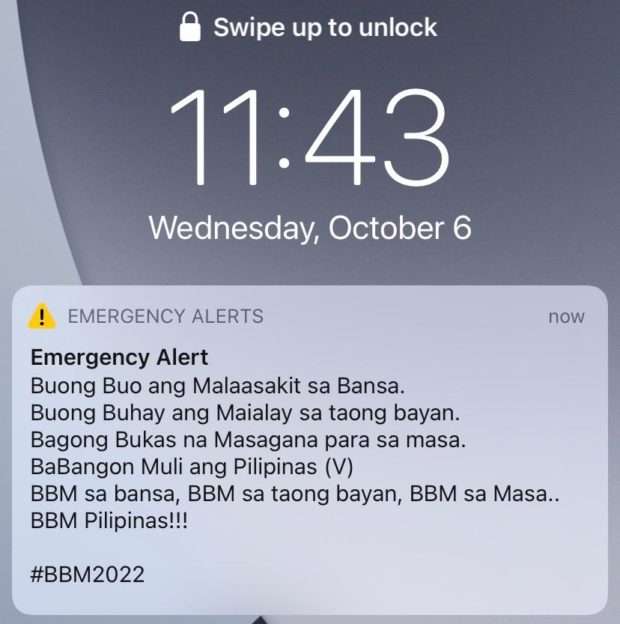 MANILA, Philippines — The use of the country’s emergency alert system to campaign for former senator Bongbong Marcos’ presidential bid is just a demolition job to derail his candidacy, his lawyer claimed on Wednesday.

According to Atty. Vic Rodriguez, Marcos’ lawyer and chief of staff, the timing of the emergency text blasts is questionable since it was done while the son of the late dictator and former president Ferdinand Marcos was filing his certificate of candidacy (COC) with the Commission on Elections (Comelec).

Rodriguez was referring to the emergency alert which featured words that start with the acronym BBM — seen short for Bongbong Marcos.  The words #BBM2022 also appeared on the message, a hashtag that Marcos’ supporters have used.

“The illegal use of the emergency blast was done at a time when Bongbong Marcos was filing his CoC and is viewed as among the many demolition jobs unleashed by those who want to frustrate his candidacy,” Rodriguez said.

“BBM and his family received similar alert notifications. We should not tolerate any group or groups’ underhanded moves to trivialize this very special tool meant to forewarn every single Filipino of an impending, actual, or post-disaster event or scenario,” he added.

Several groups including Bayan Muna party-list denounced the move, saying if it is proven that Marcos did have a hand on the text blasts, he should be held accountable.

Bayan Muna chair Neri Colmenares said that it appears the Marcoses are liable for ill-gotten wealth and ill-gotten airtime — in reference to the money obtained illegally by the family during the older Marcos’ martial law regime.

Colmenares, principal author of Republic Act No. 10639 which required the National Telecommunications Commission (NTC), the National Disaster Risk Reduction and Management Council (NDRRMC), and telecommunication companies to issue text alerts during times of disasters and calamities, said it was never the intention of the law to support partisan political activities.

Fellow Bayan Muna member and Rep. Carlos Zarate said that the NTC and the Department of Information and Communications Technology (DICT) must probe the incident to identify behind the campaign material.

But according to Rodriguez, they themselves are eager to ascertain who is behind the scheme, adding that it impedes a properly-working government service.

“We support the swift action of the NTC calling for an investigation of the illegal use of the emergency alert notification text containing pro-Bongbong Marcos narratives,” Rodriguez said.

“To those behind this despicable deed, we appeal that you do not please mess with a functioning government system that is purposely meant to save lives just so you may advance your agenda of derailing the candidacy of presidential aspirant Ferdinand “Bongbong” Marcos, Jr.,” he added.

Marcos filed his COC earlier, a day after he announced his intention to run for the presidency.  However, his bid was met with stiff opposition from groups who worry that the Marcoses’ return to power would signal the start of a stronger historical distortion that would favor the family of the late dictator.

The over two-decade regime of Bongbong’s father has been riddled with claims of wide-scale human rights abuses, attacks on political opponents, extrajudicial killings and enforced disappearances, and massive plunder.

However, the Marcoses have consistently denied any wrongdoing, even in cases wherein family members were convicted.  One example was the cases against his mother, former first lady Imelda Marcos, who was found guilty by Sandiganbayan for transferring funds to Swiss foundations while she occupied government posts in the 1970s.

But the Marcoses have insisted that they were wrongly judged, claiming that Ferdinand Sr.’s tenure was a golden age for the country.  On one occasion, Bongbong even sought changes in the country’s textbooks as some ill-gotten wealth cases were dropped against them.