MANILA, Philippines — If proven that former senator Bongbong Marcos is indeed behind the hijacking of emergency alert texts for his presidential campaign, then it seems that the Marcoses would also be guilty of robbing the country’s airwaves according to former Bayan Muna Rep. Neri Colmenares.

Colmenares explained on Wednesday that if an investigation shows that Marcos — son of the late dictator and former president Ferdinand Marcos — did use the emergency text alerts as his personal campaign material, it is another reason for the public to deny his presidential candidacy. 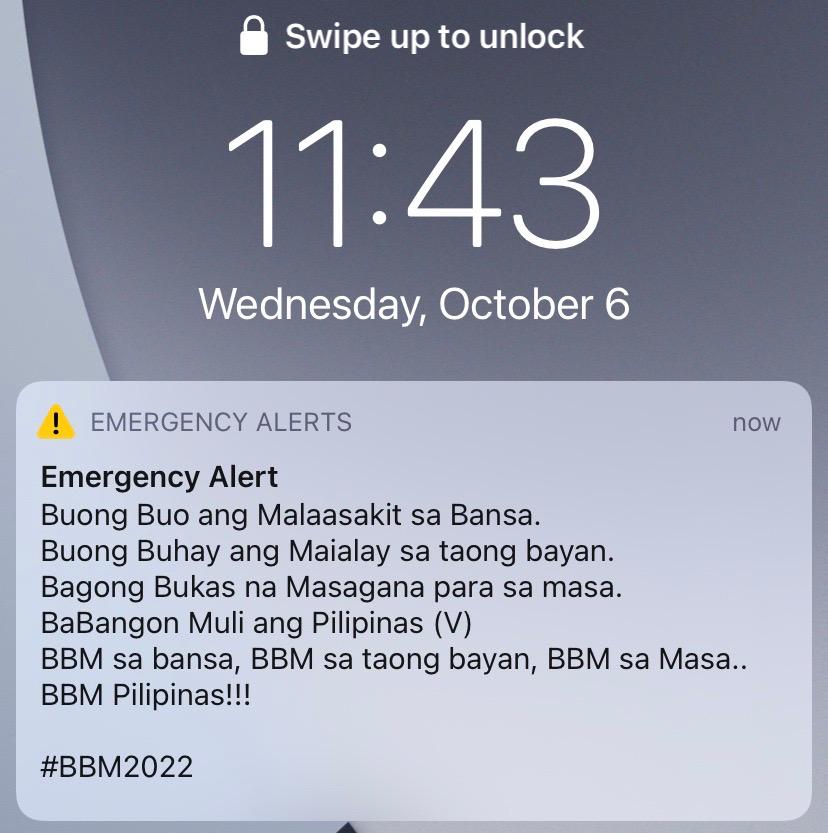 Photos now spreading on social media showed an emergency alert using words that start with the acronym BBM — which may be interpreted as short for Bongbong Marcos.  The words #BBM2022 also appeared on the message, a hashtag that has been used by Marcos’ supporters.

“If Marcos indeed hijacked the airwaves to campaign, then their greed to return to Malacañang by hook or by crook should really be stopped,” Colmenares, who is gunning for a Senate seat in the 2022 polls, said.

Colmenares was the principal author of Republic Act No. 10639 which required the National Telecommunications Commission (NTC), the National Disaster Risk Reduction and Management Council (NDRRMC), and telecommunication companies to issue text alerts during times of disasters and calamities.

According to Colmenares, it was never the law’s intention to be used for any partisan political activity.

“If they indeed hijacked the Bayan Muna-authored law for emergency alerts, then they should be investigated. When we authored the bill my intention was to help save lives. Not to be used for vested personal interest of politicians,” he explained.

On the other hand, Bayan Muna Rep. Carlos Zarate called on concerned government agencies like the NTC and the Department of Information and Communications Technology (DICT) to probe the incident as it raises a lot of questions on the integrity of the system.

“This casts serious doubt on the integrity of the system, which people are supposed to rely on for life-saving information. Aside from the NTC and the DITC, Congress should also probe this underhanded style of campaigning,” Zarate said.

Earlier, Marcos filed his certificate of candidacy for the presidential race, a day after he announced his intention.  However, his bid was met with stiff opposition from groups who worry that the Marcoses’ return to power would signal the start of a stronger historical distortion that would favor the family of the late dictator.

The over two-decade regime of Bongbong’s father has been riddled with claims of wide-scale human rights abuses, attacks on political opponents, extrajudicial killings and enforced disappearances, and massive plunder.

However, the Marcoses have consistently denied any wrongdoing, even if there were cases where family members were convicted.  One example was the case against his mother, former first lady Imelda Marcos, who was found guilty by Sandiganbayan for transferring funds to Swiss foundations while she occupied government posts in the 1970s.

But the Marcoses have insisted that they were wrongly judged, claiming that Ferdinand Sr.’s tenure was a golden age for the country.  In one occasion, Bongbong even sought for changes in the country’s textbooks as some ill-gotten wealth cases were dropped against them.