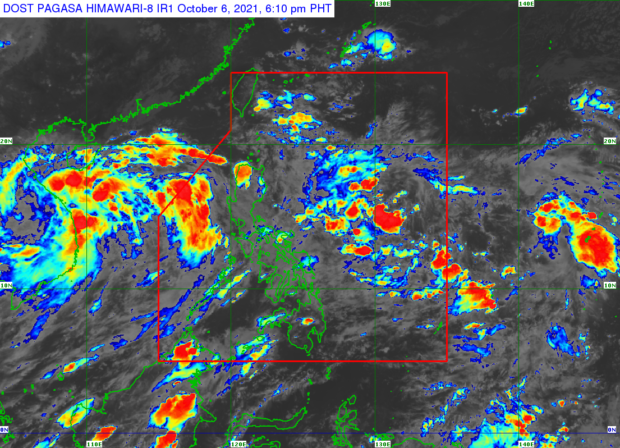 MANILA, Philippines — Tropical Depression Lannie has left the Philippine Area of Responsibility (PAR) on Wednesday morning but its trough would continue to bring rain over the western section of Luzon, including Metro Manila, on Thursday.

This was the forecast of the Philippine Atmospheric, Geophysical and Astronomical Services Administration (Pagasa) as it reported Lannie’s location to be at 710 kilometers (km) west of Subic, Zambales as of 3 p.m. Wednesday.

(Tomorrow, Luzon will still be affected by the trough of the typhoon that is already outside of PAR. Generally, the western part of Luzon will still have scattered rains and thunderstorms.)

(Meanwhile, the rest of Luzon will have generally fair weather. In case of rain, it would be brief because that’s due to the formation of thunderstorms.)

Pagasa also said generally fair weather would prevail across Visayas and Mindanao on Thursday although chances of rain due to localized thunderstorms were still likely.

On the other hand, the new low-pressure area being monitored by Pagasa has yet to enter PAR as it was located 1,310 kilometers east of Southern Luzon at 3 p.m. Wednesday.

(It may enter tonight or early tomorrow, and may transition into a typhoon on Friday or Saturday as a tropical depression.)

Once it becomes a typhoon within PAR, its local name would be “Maring,” the weather specialist said, adding that it is expected to move west-northwest towards Luzon.

But Figuracion said the latest readings indicate that the incoming typhoon has a “high uncertainty of landfall.”

Pagasa likewise released its temperature range predictions in key cities/areas of the country for Thursday as follows:

The state weather bureau said a gale warning remains up over the western seaboards of Palawan because rough to very rough sea conditions are expected in this area with waves possibly reaching up to 4.5 meters.

(Refrain from sailing in this area of the country because the ocean’s situation there is dangerous.)