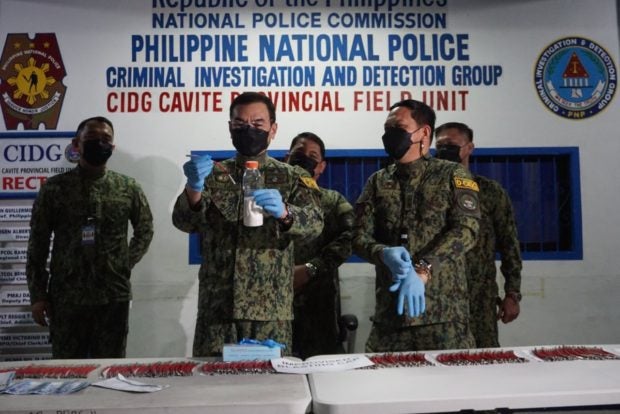 MANILA, Philippines — What originally was thought to be an ordinary buy-bust operation for the alleged sale of improvised explosive devices (IED) turned out to be a major police haul after two suspects yielded some 750 kilos of bomb-making chemical ammonium nitrate in Cavite on Thursday.

No less than Philippine National Police chief Gen. Guillermo Eleazar, during a press briefing on Friday in Imus, Cavite, gave merit to the significance of such a discovery, especially in light of the recently concluded filing of certificate of candidacy of candidates for the 2022 national and local elections.

Arrested during the operations were suspects as Charlito Tenorio, 52; and Jay-ar Suson, 34.

“Right after suspect Tenorio was arrested, he divulged to the operating team the alleged mastermind’s Jay-Ar Suson, and his whereabouts,” said Eleazar.

CPNP’s Presscon on the Arrest of Suspect for Illegal Selling of Explosive Articles | October 14, 2021

Philippine National Police (PNP) Chief Police General Guillermo Lorenzo T. Eleazar holds a press conference on the arrest of suspects for illegal selling of explosive substances and articles in an operation conducted by the Criminal Investigation and Detection Group (CIDG) in Imus, Cavite on October 14, 2021.

Afterwards, Tenorio pointed to Suson as the alleged mastermind, which prompted authorities to conduct a follow-up operation for the latter’s arrest in Tayabas, Quezon at about 5:30 PM of the same day.

The chemical were contained in 30 25-kilogram sacks, while authorities also seized 1,000 pieces of improvised blasting caps, all loaded in a commuter van.

According to police, the suspects allegedly sell the explosives for P200,000.

Based on the estimation of Criminal Investigation and Detection Group (CIDG) Director Police Major General Albert Ignatius Ferro, the confiscated stash of explosives could have a “blast radius” of some 1.5 kilometers.

“With this successful operation, we may have prevented the possibility of these materials being used for criminal activities,” Eleazar said.

Eleazar also instructed Ferro to thoroughly investigate the activities of both suspects to identify all persons involved in their operations as well as their clients.

Eleazar is also looking into the possibility that the suspects could be approached by “unscrupulous” individuals for the upcoming elections.

(We are approaching the elections, and our objective is to have peaceful and quiet elections.)

(We don’t know, just like I said, there could be unscrupulous individuals who could use them to raise funds for certain individuals in the upcoming elections.)

The PNP also coordinated with the Armed Forces following the confiscation of the bomb-making ingredients found in the suspects’ possession.

Meanwhile, the suspects will be slapped with charges of violation of Republic Act 9516 for illegal possession of firearms, ammunition and explosives.