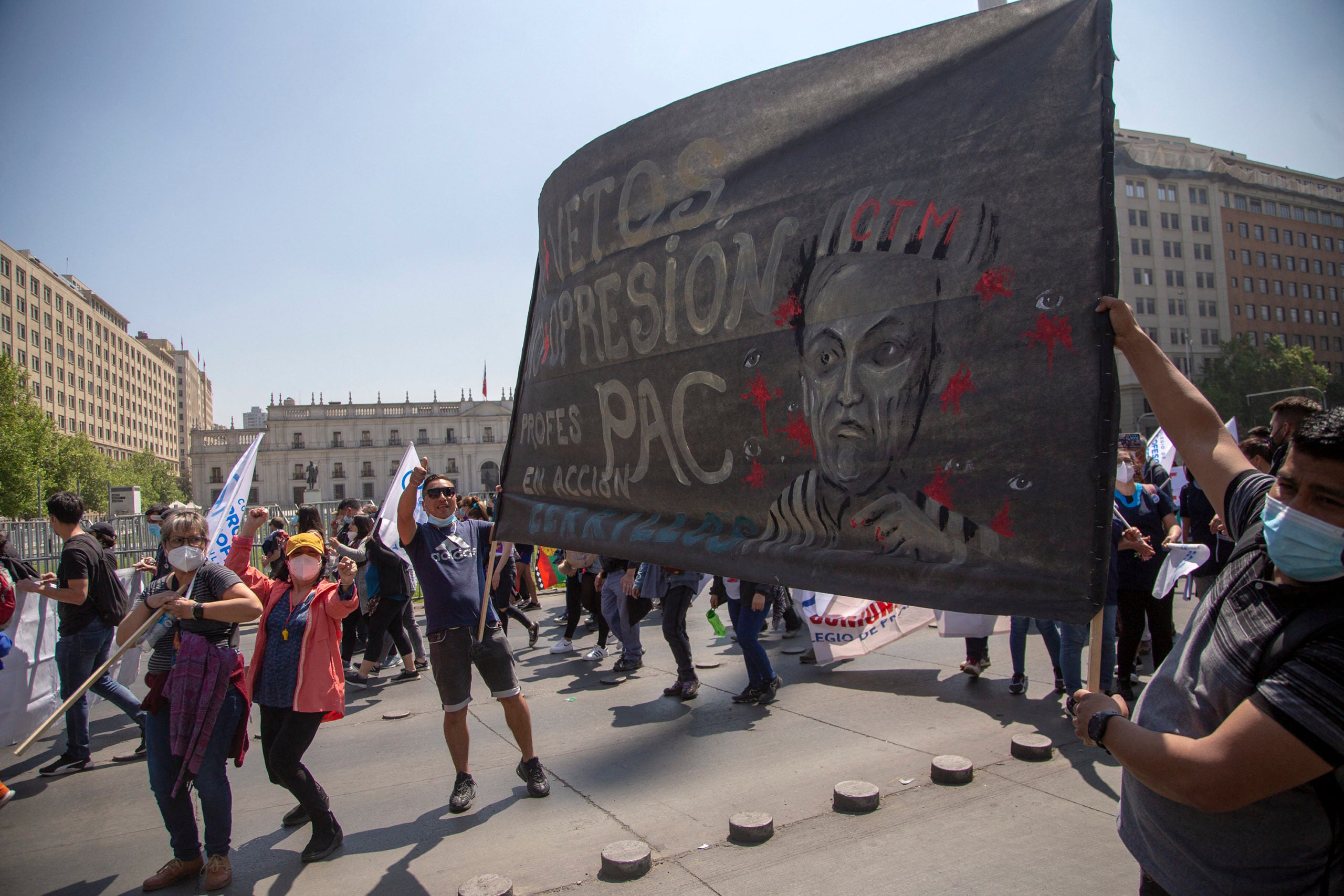 Demonstrators march during a teachers’ protest against the government of Chilean President Sebastian Pinera, outside La Moneda presidential palace, in Santiago, on October 13, 2021. – Chile’s opposition on Wednesday moved to impeach the country’s president, Sebastian Pinera, for the controversial sale of a mining company through a firm owned by his children, which appeared in the Pandora Papers leaks, a congressman said. (Photo by CLAUDIO REYES / AFP)

SANTIAGO, Chile — Chile’s opposition on Wednesday moved to impeach the country’s president, Sebastian Pinera, for the controversial sale of a mining company through a firm owned by his children, which appeared in the Pandora Papers leaks.

Pinera used “his office for personal business,” said congressman Tomas Hirsch when presenting the accusation in the lower house of Congress, the first step in the impeachment process that could last for several weeks.

The move comes after the Chilean public prosecutor’s office opened an investigation on October 8 into the claims surrounding the sale in 2010, during Pinera’s first term in office, of the Dominga mining company.

That investigation was prompted by the Pandora Papers leaks, a vast trove of reports on the hidden wealth of world leaders researched by the International Consortium of Journalists (ICIJ).

One of the richest men in Chile, Pinera has denied the claims and said that he was absolved of the charges in a 2017 investigation.

When the new investigation was opened last week, Pinera said he had “full confidence that the courts, as they have already done, will confirm there were no irregularities and also my total innocence.”

Now Chile’s Chamber of Deputies, controlled by the opposition, will have to decide whether to approve or reject the indictment, a vote that will take place the first week of November, congressional sources explained to AFP.

If it receives the green light, the case would pass to the Senate, which would have to act as a jury to seal Pinera’s fate.

It is the second impeachment case brought against Pinera after an unsuccessful attempt to remove him from office in 2019 over the at-times brutal crackdown of anti-inequality protesters.

The decision is expected to be made before Chileans head to the polls on November 21 to elect Pinera’s successor and a new congress.

The government accused the opposition of bringing “an accusation without legal basis” for political gain.

“It is the dirtiest (trick) of the electoral campaign,” said Jaime Bellolio, the government’s communications minister.

The Pandora Papers linked Pinera to the sale of Dominga through a company owned by his children, to businessman Carlos Delano — a close friend of the president — for $152 million.

The papers said a large part of the operation was carried out in the British Virgin Islands.

In addition, it said a controversial clause was included that made the last payment of the business conditional on “not establishing an area of environmental protection in the area of operations of the mining company, as demanded by environmental groups.”

That decision falls within the remit of the Chilean president.

According to the investigation, the Pinera government at the time decided not to protect the area around the mine.

If found guilty, billionaire Pinera could be jailed for up to five years.

Despite Pinera’s insistence he has been cleared of wrongdoing, the public prosecutor claimed last week that the Dominga mine was not actually “expressly included” in the case that was shelved in 2017.

Pinera insists that he knew nothing of the deal because, during his first presidency from 2010-14, he said he put the administration of his assets in blind trusts.

“As president of Chile I have never, never carried out any action nor management related to Dominga Mining,” Pinera said last week.

Dominga owns two open-air mines in the Atacama desert, 500 kilometers (310 miles) north of Santiago, that is yet to be exploited.

A mining project to do so was approved by a regional court but has yet to be ratified in the Supreme Court due to appeals.

The project included the construction of a cargo port close to an archipelago that is home to a national park reserve where protected species live, including 80 percent of the world’s population of Humboldt penguins.