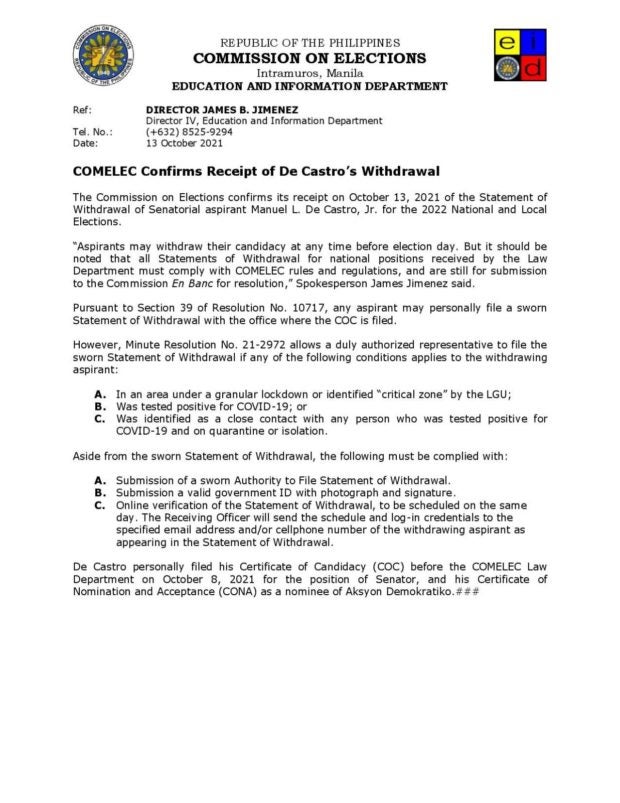 MANILA, Philippines — The Commission on Elections (Comelec) on Wednesday confirmed that journalist and former Vice President Noli de Castro has withdrawn from the  2022 senatorial race.

De Castro earlier filed his Certificate of Candidacy (COC) before the Comelec on October 8 for a senator running under Aksyon Demokratiko.

“Aspirants may withdraw their candidacy at any time before election day. But it should be noted that all Statements of Withdrawal for national positions received by the Law Department must comply with Comelec rules and regulations, and are still for submission to the Commission En Banc for resolution,” Spokesperson James Jimenez said in a statement.

According to the Comelec, any aspirant may personally file a sworn Statement of Withdrawal with the office where the COC is filed. Under Section 39 of Resolution No. 10717.

However, under Minute Resolution No. 21-2972, an authorized representative may also file the sworn Statement of Withdrawal if any of the following conditions apply to the withdrawing aspirant:

• In an area under a granular lockdown or identified “critical zone” by the LGU;

• Was tested positive for COVID-19; or

• Was identified as close contact with any person who was tested positive for COVID-19 and on quarantine or isolation.

Aside from the Sworn Statement of Withdrawal, the following must be complied with:

• Submission of a sworn Authority to File Statement of Withdrawal

• Submission of a valid government ID with photograph and signature

De Castro earlier announced his withdrawal after “a change in his decisions” but promised that he will continue to lend his voice to the public.