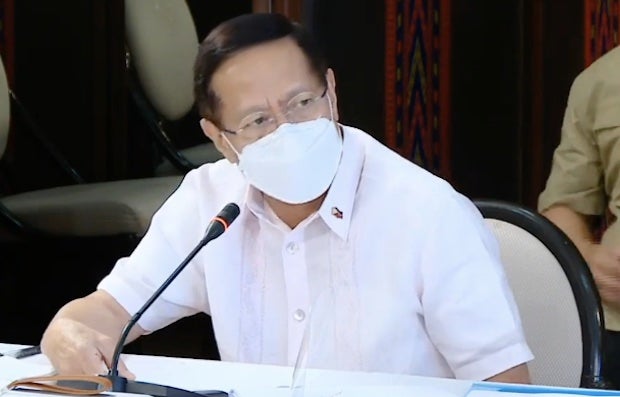 FILE PHOTO: Health Secretary Francisco Duque III gives his report on the COVID-19 situation during the taped briefing with President Rodrigo Duterte on Wednesday, May 26, 2021. (Photo from an RTVM video posted on Facebook)

MANILA, Philippines — Health Secretary Francisco Duque III on Wednesday agreed with fellow doctors that the executive department should not “block” Cabinet officials from attending the ongoing Senate blue ribbon probe but sought for certain adjustments in the conduct of the hearings.

During the budget hearing of the Department of Health (DOH), Senate Minority Leader Franklin Drilon asked Duque about the call of medical professionals for the executive branch not to obstruct the investigation into the government’s pandemic-related purchases.

Drilon said the physicians wanted public officials to “be accountable to the people” as “they should serve with utmost responsibility, integrity, loyalty, and efficiency.”

“Do you support the call of these physicians, members of your profession?…You agree with the call of your fellow physicians supporting the blue ribbon investigation?” the minority leader asked Duque.

“Yes…to ferret out the truth. That is my position,” Duque said in response.

Drilon continued and asked the health chief about his position regarding the executive department barring Cabinet officials from attending the Senate inquiry.

“The position [of the physicians], in so many words, [is] that the executive should not block the testimonies of Cabinet members before the blue ribbon, do you agree with that?” the senator asked.

While it took a few moments for Duque to answer, he eventually said: “Yes, we do.”

“But of course at the same time we have to attend and focus on our state of public health emergency and we need to ramp up our vaccination activities and really make time to oversee and monitor the progress,” he added.

Last week, President Rodrigo Duterte formally prohibited his Cabinet secretaries and other officials of the executive branch from attending the Senate probe through a memorandum.

“I would like to state for the record that prior to the memorandum order, we had a 100-percent attendance, the entire DOH was present for 10 straight hearings in both houses of Congress,” Duque said.

“So I am of the position that we have been in support of the congressional, in particular the Senate blue ribbon hearings,” he added.

Drilon asked Duque once again if he supports the blue ribbon committee investigation “subject to reasonable set up as to the number of officials attending.”

“For example, we note that it is upon your initiative that almost all of the directors of the DOH will attend. We do not require that many…that’s your prerogative but we do not like to be pictured as paralyzing the COVID effort of this government,” the senator added.

“So at least you agree with your fellow professionals in the medical field were correct in calling upon the executive not to stop and block the blue ribbon investigation?” Drilon said.

Duque answered in the affirmative, stressing that the DOH is “one in the pursuit of truth.”

But the health secretary sought “reasonable adjustments” in the conduct of the Senate investigation in order for DOH officials to still attend the hearing “but at the same time also make sure that we are able to do our jobs.”

“Maybe the frequency can be looked into. Like for example, in one week, how many times? Maybe once. It’s just a suggestion,” Duque added.

In recent weeks, the Senate blue ribbon hearings, which last an average of six hours, were usually conducted twice a week.

“Come up with a compromise, I think you would contribute on this issue between the executive and the Senate,” the senator said.

Duque said he will reach out to both officials.