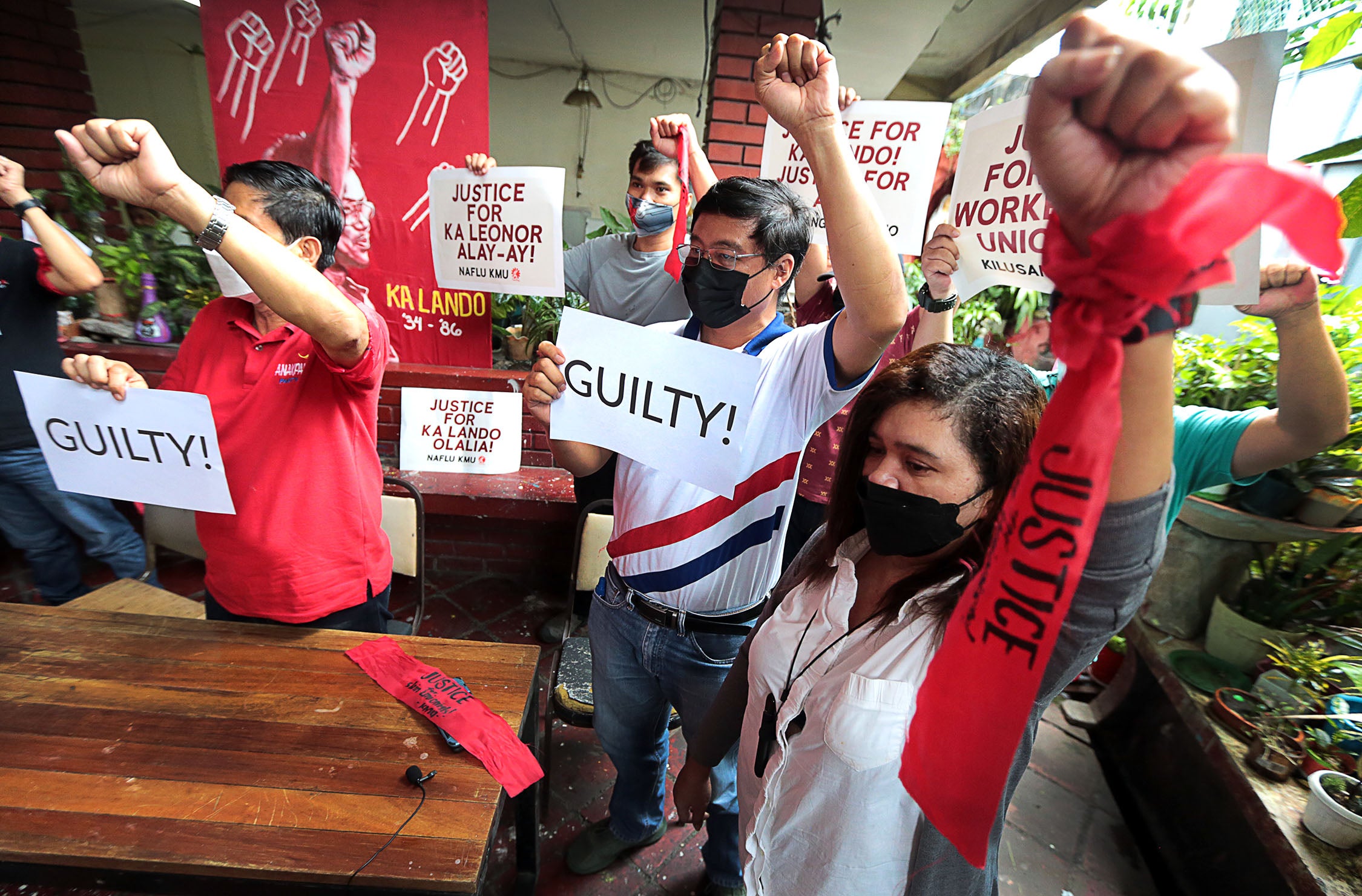 MANILA, Philippines — An Antipolo City court convicted three soldiers for the 1986 murder of labor leader Rolando Olalia and trade union organizer Leonor Alay-ay, bringing closure to what many saw 35 years ago as a major political crime that tested the Cory Aquino presidency amid the restiveness in the military.

Sordan also ordered them to pay Olalia’s heirs P1.2 million in damages, and P900,000 for Alay-ay’s heirs. The awards will earn an interest of 6 percent per year from the decision until the date it is fully paid.

All three convicts were members of Reform the Armed Forces Movement (RAM), which counted as a faction in Aquino’s political coalition that eventually clashed with her progressive allies.

Casanova, Jabatan and Perez were arrested and sentenced to a 40-year prison term in 2012.

Welcoming the conviction, lawyer Rolando Rico Olalia, a son of the slain labor leader, said “Our victory today has only [strengthened] our resolve to never abandon our search for the remaining nine men involved in our father’s brutal killing.”

“Only when [they have] been brought before the courts to be held accountable for their crimes will justice be finally served,” Rolando Rico said.

According to lawyer Edre Olalia, a cousin of the labor leader, two witnesses had earlier claimed that some of the suspects were already killed “because they wanted to squeal.”

“I don’t know where they are,” he said of the witnesses, former Sergeants Medardo Dumlao Barreto and Eduardo Bueno. “They were taken under the Witness Protection Program in 1998. Presumably they are [still] under the program.”

The National Union of Peoples’ Lawyers, which Olalia heads, said it welcomed the court’s decision “in this long, drawn-out case of unspeakable murder and torture.”

Elmer Labog, chair of Kilusang Mayo Uno (KMU) which Olalia headed in the 1980s, said “While we rejoice in this ruling, we point out the current bleak situation of trade union and human rights in the country, with 56 of our fellow workers and unionists being victims of extrajudicial killings under [President] Duterte.”

Olalia and Alay-ay were found dead in Antipolo, Rizal, on Nov. 13, 1986, their bodies mutilated beyond recognition.

Olalia’s eyes were gouged out, his hands were bound, and his mouth was stuffed with newspaper. A scar on Olalia’s leg was the only identifying mark that confirmed his identity.

As established by the Antipolo court, the two were kidnapped and tortured in a house maintained by the Ministry of National Defense before they were brought to an empty lot in Antipolo, and shot and stabbed repeatedly.

Back then, the National Bureau of Investigation said the killings were a prelude to RAM’s “God Save the Queen” coup plot of Nov. 22, 1986, targeting leftists in the Aquino government.

Olalia was not part of Aquino’s coalition, but his group, KMU, observed what it called a “critical collaboration” with that government.

RAM, led by then Col. Gregorio Honasan and then Lt. Col. Eduardo Kapunan, among others, launched a series of coup plots against Aquino from 1986 to 1989.

But Honasan denied being involved in the killings and in the “God Save the Queen” plot when he was implicated in the case much later—after he was elected senator in 1995. In 1987, a task force formed by Aquino to investigate the killings filed two counts of murder against Sergeants Galicia and Franco Espartero before the Antipolo court, then presided over by Judge Marietta Legaspi.

But Espartero was acquitted in 1990 after the prosecution failed to prove his guilt beyond reasonable doubt. Galicia, on the other hand, was made state witness but later disappeared.

In 1998, more than a decade following the murders, the Department of Justice (DOJ) revived the case after Barreto came forward as a new witness, implicating several RAM leaders.

According to Barreto, a transport officer of the defense ministry, Master Sgt. Felizardo Cabanilla, boasted to him that he was personally ordered by Honasan to “clean up” the mess in the vehicle used in the abduction of Olalia and Alay-ay.In 2013, Bueno surfaced as state witness, saying that Honasan was the commanding officer of the accused soldiers.

But Honasan was never charged, as prosecutors themselves conceded that the testimonies implicating him were hearsay. Kapunan was included among the 13 respondents in the murder charges that the DOJ filed in 1998. Casanova, Jabatan, and Perez were also named respondents.

The RAM leader sought immunity from prosecution, saying he was covered by an amnesty that President Fidel Ramos granted through Proclamation No. 347.

But the Supreme Court in 2009 dismissed Kapunan’s petition. Three years later, he turned himself in and was handed over to the Army’s custody.

Testifying in April 2013, Kapunan admitted ordering a surveillance on Olalia but denied having a hand in the killings. Six months later, the court, now presided over by Judge Ma. Consejo Gengos-Ignalaga, allowed Kapunan to post bail of P400,000. Ignalaga said in her order that “there was no clear evidence” linking Kapunan to the murders. But she later inhibited herself from the case upon the motion of the relatives of Olalia and Alay-ay questioning her “impartiality and fairness.”

Yet Sordan, the next judge on the case, granted a demurrer to evidence which Kapunan filed in 2016 and which effectively acquitted him. Her ruling quoted Ignalaga’s decision that the prosecution failed to establish a conspiracy between Kapunan and the other accused.

Kapunan was named ambassador to Myanmar in 2017. Last month he was confirmed ambassador to Germany. —WITH a report from INQUIRER RESEARCH INQSources: Inquirer Archives, doj.gov.ph and dfa.gov.ph