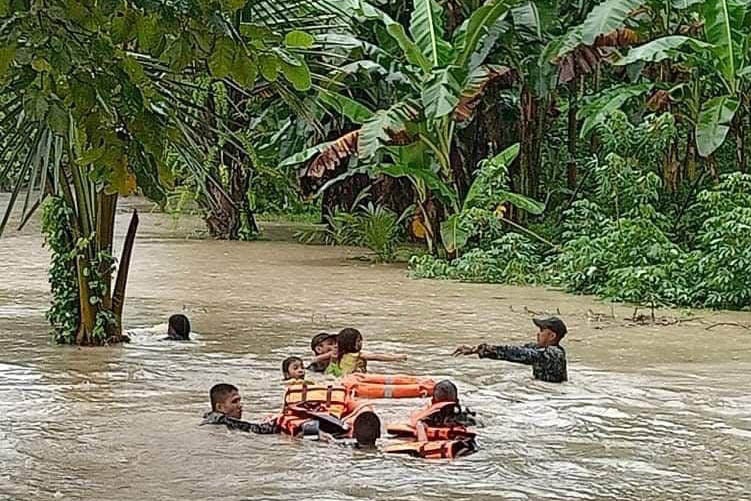 PALAWAN RESCUE Police officers rescue a group of children in the flooded village of Labog in the southern Palawan town of Sofronio Española on Monday. Unusually heavy rains brought by Severe Tropical Storm “Maring” triggered flash floods and landslides in northern Luzon and Palawan, leaving at least 11 dead before blowing out of the country on Tuesday. —CONTRIBUTED PHOTO

Maring dumped 625.5 millimeters of rain on Baguio City, more than a month’s worth in a 24-hour period ending on Tuesday morning, the Philippine Atmospheric, Geophysical and Astronomical Services Administration (Pagasa) reported.

The city traditionally gets the highest amount of rain in the country, according to various meteorological accounts, but Monday night’s deluge exceeded the 535 mm from Typhoon “Ompong” (international name: Mangkhut) in 2018 and the 327 mm from Supertyphoon “Lawin” (international name: Haima) in 2016.

It was more than the average rainfall of 454.3 mm that Baguio’s rainfall monitoring station gets for the whole month of October, based on Pagasa’s climatological records over a 30-year period.

Monitoring stations in Dagupan City in Pangasinan province and Laoag City in Ilocos Norte also recorded rainfall above this month’s average. In Dagupan, 241.3 mm was recorded, higher than the October average of 215.9 mm; in Laoag, it was 123.4 mm compared with the 103.3 mm average.

Pagasa weather specialist Ariel Rojas said Baguio City received heavy rains because of its location on the windward side of the Cordillera mountain range, which blocks thick rain clouds, forcing them to dump their load over the mountainous areas in the region.

Hydrologist Oyie Pagulayan said the heavy rain across northern Luzon could be the combination of Maring and the southwest monsoon, which it continued to enhance.

Maring blew out of Philippine territory at 11 a.m. on Tuesday but its strong winds extend outward up to 800 kilometers from its center.

As of 4 p.m. on Tuesday, Maring’s center was 505 km west of Calayan, Cagayan province. It was packing winds of 100 km per hour near the center and gusts of up to 125 kph.

As of 4 p.m. on Tuesday, eight spillway gates were opened in Ambuklao Dam, and six in Binga Dam. Both dams are located in Benguet province. Magat Dam, which is located along Magat River, opened one gate on Tuesday afternoon.

A landslide in Baguio’s Barangay Dominican-Mirador killed an elderly man whose two granddaughters remained missing. Their sister survived with injuries.

Rescuers deployed a life-detecting sonar that could recognize a heartbeat in depths of about 12 meters to help find the missing girls under more than three meters of mud.

In nearby La Trinidad town, Mayor Romeo Salda said three young siblings, an 8-year-old girl, her 6-year-old brother, and their 2-year-old sister, died on their way to a hospital after they were recovered from their home which was buried in a landslide. Their parents survived.

Some residents of Ilocos Sur appealed for help and rescue through social media as they climbed rooftops to escape rising floodwaters.

Mark Masudog, public information officer of the Office of the Civil Defense in Ilocos, said rescue teams were already deployed to the flooded villages in the towns of Sta. Lucia, Sta. Cruz, Sta. Maria, Santiago, Narvacan and Candon City.

The body of an unidentified woman believed to have drowned was retrieved on the shores of Candon’s Barangay Patpata Segundo.

A search and rescue operation was launched for a 33-year-old woman from Badoc town, also in Ilocos Norte, who was swept away while crossing the raging waters of Badoc river together with three others on board a cart being pulled by a carabao.

In Cagayan, a woman, also 33, from Iguig town, drowned in the Cagayan River on Tuesday morning when she was also swept away by its strong currents.

Widespread flooding also hit the provinces of Pangasinan and La Union where at least 1,100 individuals had been evacuated, Masudog said.

In Cagayan province, over 200 families were evacuated due to massive flooding in Tuguegarao City and the towns of of Aparri, Buguey, Ballesteros, Calayan, Lallo, Lasam, Baggao, Gattaran, Peñablanca and Santa Teresita.

Floods and landslides also were reported in different towns of Palawan on Tuesday, leaving at least five dead and 19 missing.

The fatalities included a stroke victim, Juan Dubla, and his wife, Melva, both vegetable farmers, who drowned in floodwaters that inundated Princess Urduja village, and 5-year-old Jemuel Remonsada who also drowned in the flood at Batang-batan village, both in Narra town.

According to a report from the provincial disaster office, the floods have displaced 325 families, or 1,348 individuals.

Presidential spokesperson Harry Roque appealed to the public to take precautions and observe minimum public health measures and cooperate with local authorities in case of evacuations.

Ricardo Jalad, executive director of the National Disaster Risk Reduction and Management Council, said people were “a bit afraid” to evacuate, fearing they might get infected at the evacuation centers.