Doctors come out of their shells, demand end to corruption, incompetence in COVID handling 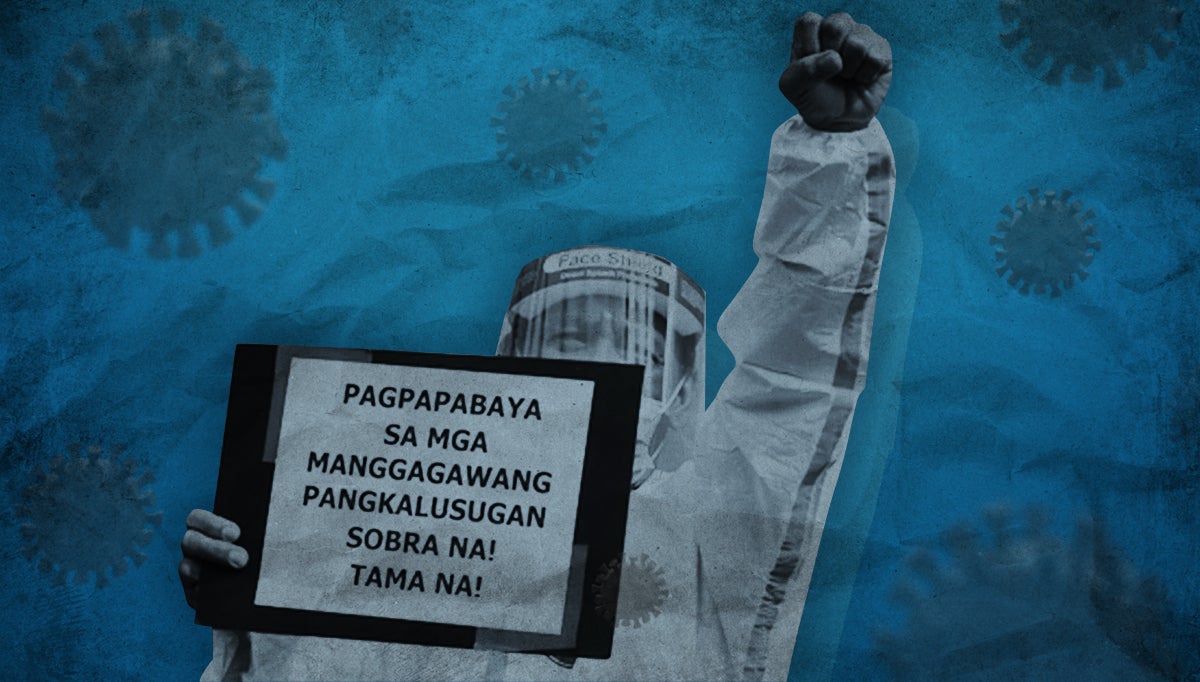 MANILA, Philippines—Over a year into the COVID-19 pandemic and after several lockdowns and pandemic policy changes, the country’s distinguished medical leaders united to call out the government’s “incompetence, insensitivity and corruption.”

Over 300 doctors, medical leaders—who currently hold or previously held top posts at various medical and health organizations—and five former health secretaries signed their names on a manifesto expressing their collective call for an end to  ineffective and corruption-ridden pandemic response.

The doctors made their sentiments known in the manifesto that came out as a full-page ad in the Philippine Daily Inquirer amid the ongoing Senate blue ribbon committee investigation into transactions between the Department of Health (DOH), Procurement Service-Department of Budget and Management (PS-DBM) and Pharmally Pharmaceuticals Corp.

Pharmally was a foreign-owned company that was set up in the Philippines in 2019 with capitalization of less than P600,000 and won up to P11 billion in COVID supply contracts from the PS-DBM on behalf of the DOH. 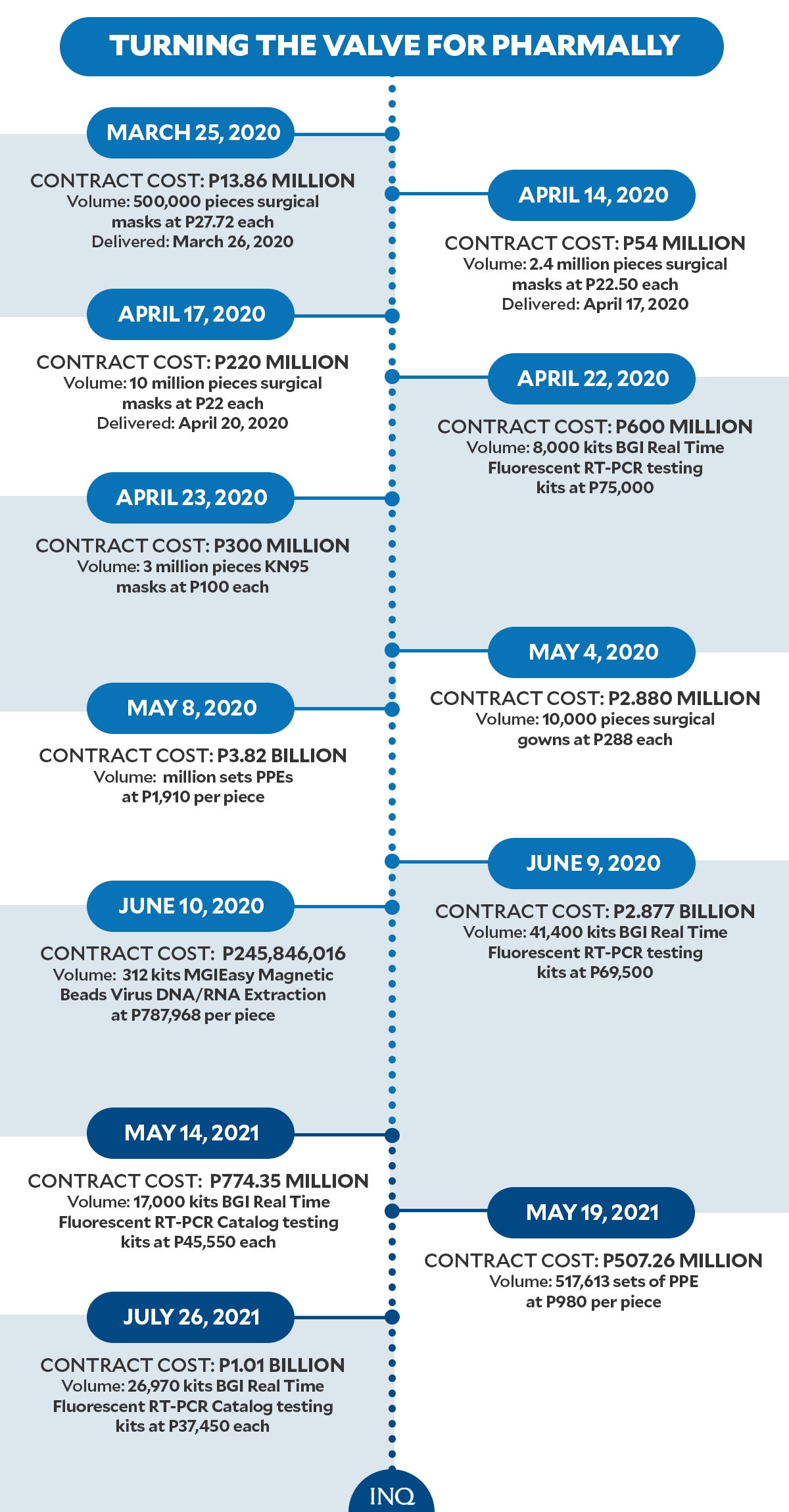 “The Filipino people are losing their lives, their livelihood and their hope. What more proof is needed to convince us that the respect that they deserve from their leaders has been wanting at best, and nil at worst?” the doctors’ statement read.

“What alternative truth can possibly stop us from saying that what is happening to our country must end?” the doctors said.

“What must we scream and how must we act to put our country back on the right track?” they added.

Turning away from passivity

Medical leaders said they, along with other health care workers and members of the medical sector, have remained true to their sworn Code of Conduct to serve and provide medical attention to the public without regard for politics.

However, as COVID-19 continues to overwhelm the country’s health system and take the lives of many more Filipinos, medical leaders have become more aware of the dangers of what they now call a “long-standing passivity” among members of the health profession.

“It has left free and unrestrained politicians and people with absolutely no competence in running the country, much less this catastrophic health debacle, to abuse power with impunity, misuse and steal taxpayers’ money and insult their intelligence, feed on the Filipinos’ desperation and helplessness at the time when their plea for true leadership is loudest but has remained unheeded,” they wrote.

“Unmitigated and shameless greed is being flaunted to our faces!“

The group also warned the public of the corruption, impunity, and the “total disregard for decency and morality” that has been normalized by some elected leaders.

“The so-called leaders, voted into office ‘without thinking’, have no more shame – brazen, avaricious, sugapa, with no regard for how the nation would survive!” the medical leaders said. 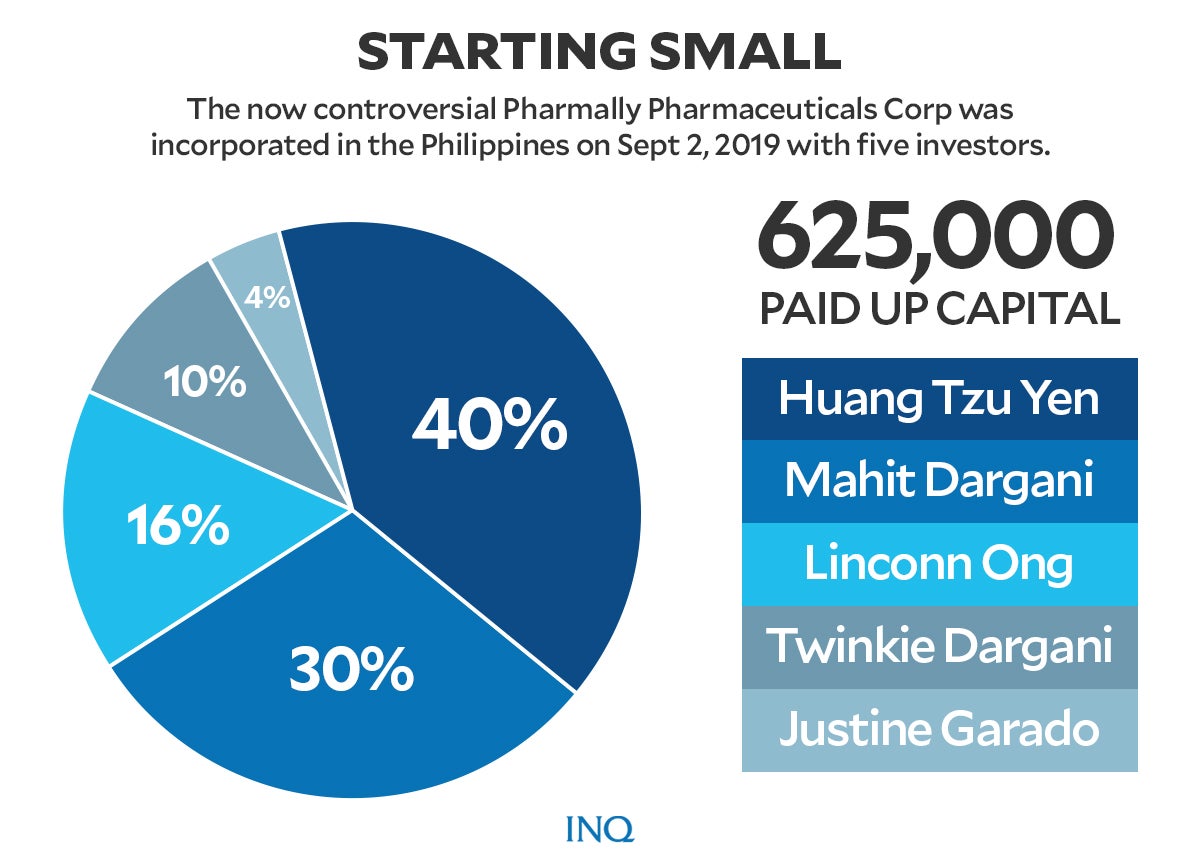 “They actually believe that they can go on and on with this delusion of irreproachable power, reflected from their leader who they will eventually dump when the time comes,” they added.

Aside from increasing cases of COVID-19 in the country and the nation’s slow vaccination progress, the government is also currently facing controversies involving trillions of pesos of wasted pandemic response funds.

In August, the Commission on Audit (COA) has flagged deficiencies in the use by the DOH of P63.72 billion in funds which were supposed to be used to help fight the COVID-19 pandemic.

The COA found billions of pesos in the coffers of the health department, as well as suspected irregularities in transactions made using the COVID-19 funds.

The Senate is currently investigating transactions between DOH and Pharmally which involved up to P11 billion worth of supply contracts for medical supplies in 2020. 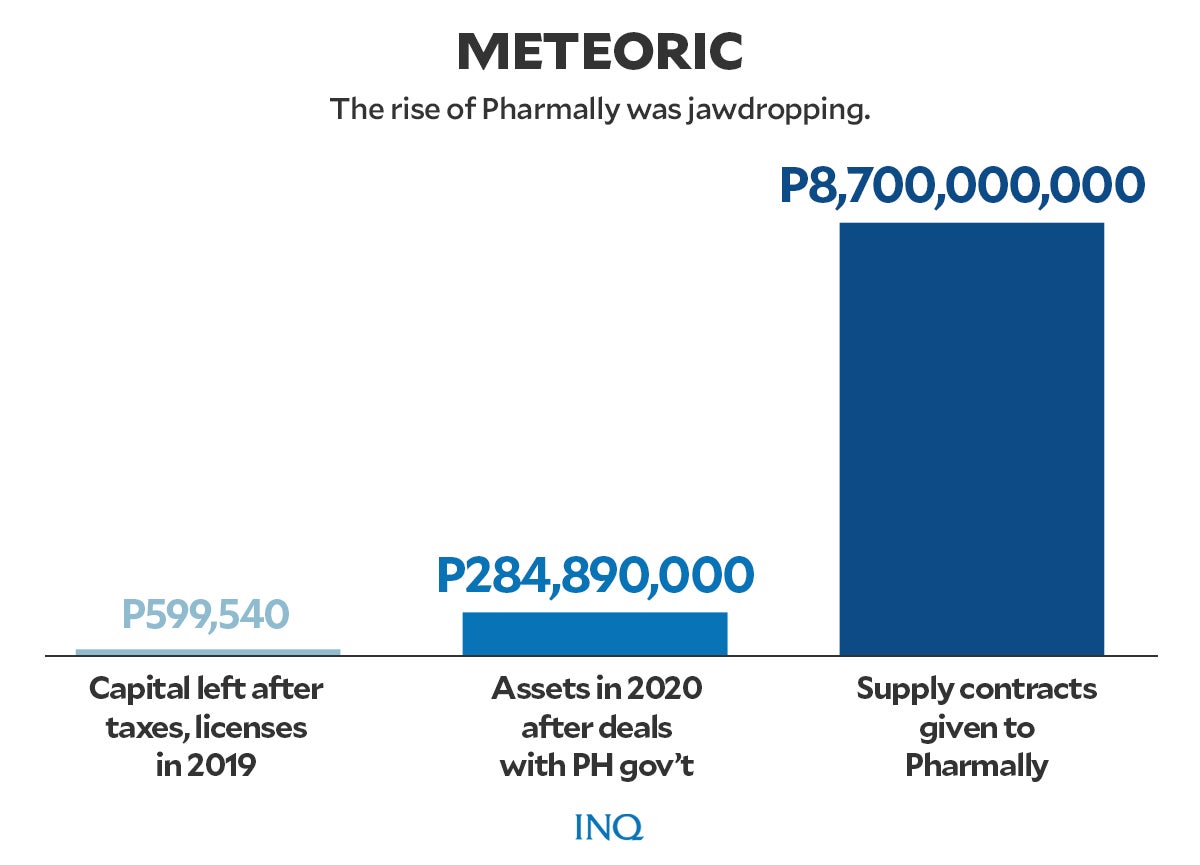 Pharmally, which was only several months old and had P625,000 in paid-up capital when tapped by the PS-DBM, allegedly supplied overpriced face masks, personal protective equipment (PPE), COVID test kits and other medical supplies. It was revealed that Pharmally was just a middle man and not a manufacturer and had no finances to pay suppliers.

Senators also questioned the alleged P550 million worth of test kits that had expired in 2020 without being used, as well as the acceptance by PD-DBM of face shields deemed unfit for use by health care workers at the frontline of the health catastrophe.

The group of medical leaders has expressed support for the ongoing investigation by the Senate blue ribbon committee.

“Public office is a public trust,” the doctors’ manifesto read.

“Public officials should be accountable to the people. They should serve them with utmost responsibility, integrity, loyalty, and efficiency. They should act with patriotism and justice and lead modest lives,” the statement read.

“We do not and cannot expect anything less,” it added.

They also asked that erring individuals and groups be held accountable for their actions.

Duterte earlier said he wanted to bar his Cabinet members from attending the hearings so that they could focus on the pandemic response.

In the petition filed by the Philippine College of Physicians (PCP) and other medical societies, members of the medical profession called on Duterte “not to obstruct the testimony of material witnesses to any investigation.”

“We call on all government officials to support the call for truth, ensure that the wheels of justice grind swiftly and surely, and provide testimony when sought,” the petition filed last Oct. 6 stated.

“We call on the Senate to complete the inquiry swiftly and with utmost diligence, to get to the truth behind the alleged corruption, then file a case before the Department of Justice or Ombudsman at the soonest possible,” it added.

The group of medical leaders likewise urged the Department of Justice (DOJ) and the Office of the Ombudsman to conduct an impartial and thorough investigation of the case and to file cases against those responsible for corruption.

Presidential spokesperson Harry Roque clarified that the memorandum was already drafted way back and despite having the draft, Duterte allowed his Cabinet members to attend the first 12 Senate hearings.

“The [memorandum] was drafted way before the 12 hearings were conducted. Maybe the President took time to sign it but he never prohibited his Cabinet to appear [back then],” Roque said at a press briefing on Oct. 11.

“[Duterte] only said it’s enough after 12 hearings since there are no new questions asked and no new answers [from the Cabinet members],” he added.

However, Roque said it was also part of the President’s proposal to leave investigations and filing of cases to DOJ and the Office of the Ombudsman.

“That came from the President. If what they (physicians who signed the petition) want to do is oversight function and prosecution for crimes committed, leave it to the DOJ and the Ombudsman,” said Roque.

Step up to the plate

According to former health secretary Esperanza Cabral, the memorandum issued by Duterte was meant to block the ongoing Senate investigation.

“The PCP, past presidents and other people who have signed the statement think that the President is actually obstructing the investigation,” Cabral said.

Aside from Cabral, four other former health secretaries—Paulyn Ubial, Carmencita Reodica, Manuel Dayrit and Enrique Ona Jr.—have also signed the collective expression of indignation by the members of the medical profession and the health sector.

“We will renounce any efforts to obstruct or cover up testimonies on what truly happened. We are here to demand transparency, exigency, and accountability,” Limpin said.

Former government health adviser Dr. Tony Leachon — also past president of the PCP — explained that the statement was addressed not only to erring government officials, but also to the public and especially the healthcare workers and medical front liners in the country.

In a Facebook live late Thursday (Oct. 7), Leachon—who had been advising the government on COVID response previously—said that medical professionals have kept mum amid the worst crisis due to fear.

He recalled presidential spokesperson Roque’s outburst during a meeting with a group of medical front liners last month.

During the incident, Roque was seen berating doctors for expressing discontent over the government’s pandemic response.

“This time, we will not allow that to happen,” said Leachon, adding that the medical leaders, health care workers, and Filipino citizens should gain moral courage and “step up to the plate” to call out ineffective and corrupt governance.

In the statement, the medical leaders urged health care workers to speak up and stand against corruption and injustices which could compromise the nation’s health.

“We shout out our indignation and intolerance to what is happening! We will no longer compromise the truth for what we have been conditioned to believe to be true but clearly isn’t, we shall not go down the slippery slope of decay as a nation,” the statement said.

Medical leaders behind the petition

Aside from Leachon, other respected former presidents and leaders of medical societies have also signed the unity statement, like former president of PCP and aspiring senator Dr. Minguita Padilla, and Healthcare Professionals Alliance Against COVID-19 (HPAAC) spokesperson Dr. Antonio Dans.

“We are the leaders of the health profession and the health sector,” the group said in their statement.

“As we look beyond our individual comforts and interests, we aspire to fight for order, decency and integrity in government, and commit to take collective action against poor governance and impropriety in the health sector for the sake of our patients, our colleagues, our families and children, the doctors, nurses and nurse assistants at the frontlines, the medical technologists in the laboratories, and for our own sake,” they added.