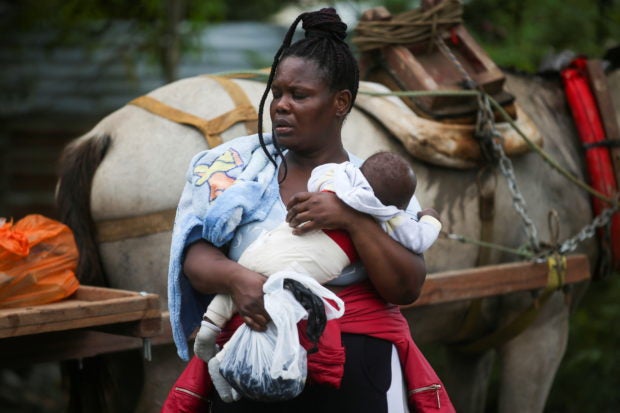 A migrant holds a child while preparing to cross into Panama and continue north, in Acandi, Colombia September 23, 2021. REUTERS FILE PHOTO

PANAMA CITY — On their trek north towards the United States, some 19,000 migrant children have crossed the dangerous jungles that sprawl the border between Panama and Colombia so far this year, the United Nations children’s agency Unicef said Monday.

The number of children who crossed the Darien Gap is almost three times higher than the total for the previous five years, it said in a statement, adding that one in five migrants crossing the border are children, and half of them is under five years old.

In 2021, at least five children were found dead in the jungle, the agency said, adding that “more than 150 children arrived in Panama without their parents, some of them are newborn babies – a nearly 20-time increase compared to last year.”

Migrant children sometimes travel with relatives or in the hands of human smugglers.

Jean Gough, Unicef regional director, said: “Deep in the jungle, robbery, rape and human trafficking are as dangerous as wild animals, insects and the absolute lack of safe drinking water. Week after week, more children are dying, losing their parents, or getting separated from their relatives while on this perilous journey.”

Unicef said migrants of more than 50 nationalities – from Africa, South Asia and South America – have crossed the area.

In early 2021, Panamanian authorities had warned of a possible crisis after opening the borders that had for months been closed because of the pandemic.

By September, the immigration authorities of the Central American nation reported a record number of 91,305 migrants who entered from neighboring Colombia. Of these, 56,676 were Haitians and 12,870 Cubans.

The Darien Gap is an extensive and inhospitable strip of tropical forest that divides Panama and Colombia, considered the most dangerous on the continent.

Migrants move along trails, exposing themselves to drug gangs and assailants, as well as wildlife and rivers.