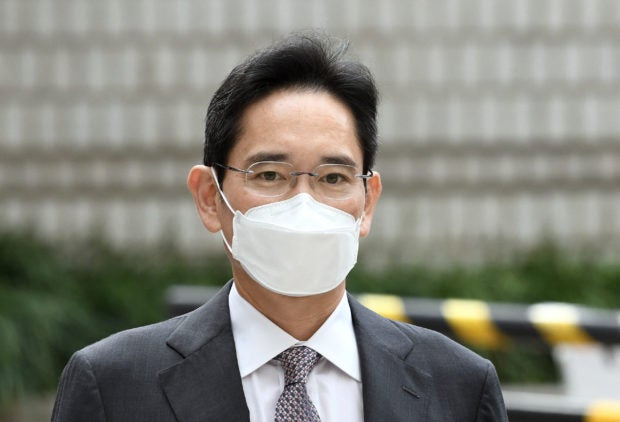 Lee Jae-yong, Samsung Electronics vice chairman and de facto leader of Samsung Group, arrives to court for his trial on charges of illegally using the anesthetic propofol, at the Seoul Central District Court in Seoul on October 12, 2021. (Photo by Jung Yeon-je / AFP)

SEOUL — The de-facto leader of the sprawling Samsung group Lee Jae-yong went on trial Tuesday on charges of illegally using the anesthetic propofol, the latest legal travail to beset the multi-billionaire.

Lee — the vice-chairman of the world’s biggest smartphone maker Samsung Electronics and according to Forbes the world’s 297th richest person — is accused of having repeatedly taken it at a plastic surgery clinic in Seoul in 2017 and 2018.

Propofol is normally a medical anaesthetic but is also sometimes used recreationally, and an overdose of the drug was given as the cause of pop star Michael Jackson’s death in 2009.

Usage is normally seen as a minor offense in South Korea and prosecutors originally proposed fining him 50 million won ($42,000) under a summary indictment, a procedure where less serious cases do not go to court.

But the court overruled the prosecution and ordered a trial.

Lee’s lawyers maintain the substance was administered for medical reasons.

“It was prescribed in accordance with medical procedure by a doctor during Lee’s treatment,” they said in a statement.

The firm is the flagship subsidiary of the giant Samsung group, by far the largest of the family-controlled empires known as chaebols that dominate business in South Korea, the world’s 12th largest economy.

Two months ago he was released early from a two and a half year prison term for bribery, embezzlement and other offences in connection with the corruption scandal that brought down ex-South Korean president Park Geun-hye.

The early release was seen as the latest example of South Korea freeing on economic grounds business leaders imprisoned for corruption or tax evasion.

Samsung Electronics subsequently announced a giant $205-billion investment plan, three-quarters of it planned for the South.

But Lee remains on trial on separate accusations of manipulating a takeover to smooth his succession at the top of the Samsung group — the same controversy over which he was said to have sought help from Park.