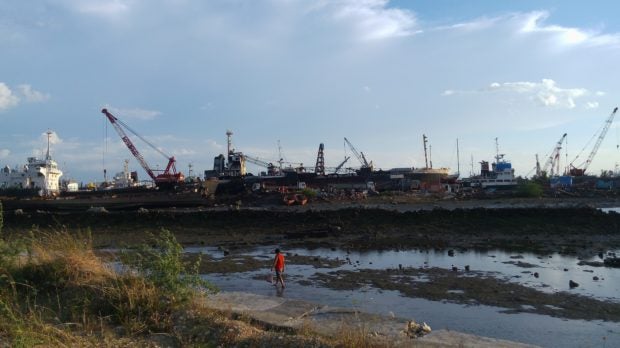 A fisherman collects seashells on the seabed during a low tide near a shipyard in Barangay Bagacay, Consolacion town, Cebu. The area is part of the 235.8 hectares that the municipal government wants to reclaim in partnership with a private consortium. (Contributed photo)

CEBU CITY––An environmental lawyer and a former commissioner of the Presidential Commission on the Urban Poor are questioning the legality and capacity of a consortium to undertake a 235.8-hectare reclamation project in northern Cebu town.

Moreover, it had a capital investment only of P10 million.

“How can they manage a multi-billion peso project if they only have a capital investment of P10 million? Also, they have no sufficient experience to do it,” she said.

Osorio said they were studying Supreme Court rulings to find out whether or not elected officials could be a director of a private firm at the same time.

“I’m sure that a mayor could not be a director of a private firm. In this case, we are talking about a congressman. That’s why we need to check with the High Court,” she said.

When reached for comment, Yap maintained that it was not illegal to own corporations.

“But if you are suggesting conflict, then I may as well divest in the company to put the issue to rest. I think it will abode well for other parties in their uncertain quest to help Consolacion develop,” he added.

Nerito Acas-Martinez, who sits as a project consultant in Consolacion, said there was nothing wrong if an incumbent congressman was among the incorporators of LSDC.

“If one is an elected government official, that doesn’t mean that he can’t have private businesses,” he added.

Martinez maintained that Consolacion officials wanted to proceed with the reclamation project to “address the severe traffic congestion in the municipality.”

Osorio and Ligas also questioned the refusal of Consolacion officials to release documents about the reclamation project. 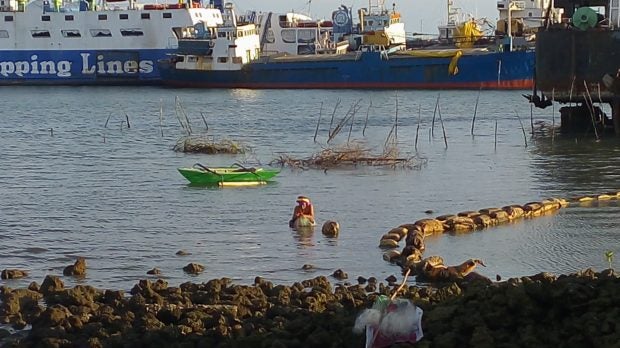 A fisherman prepares his net just outside a shipyard in Barangay Bacagay, Consolacion town, Cebu. The area is part of the 235.8 hectares that the municipal government wants to reclaim in partnership with a private consortium. (Contributed photo)

Both asked for documents about the reclamation project but were turned down by the municipal government.

Owners of six shipyards to be affected by the project had also asked for documents from Mayor Joannes Alegado, including a copy of the proposed joint venture agreement of the municipality with LCSD, the notice of award of contract, and an ordinance supporting the project, but their request was turned down.

Ligas, who was helping the 3,000 shipyard workers affected by the project, said projects involving public property and undertaken by public officials were not subject to any secrecy laws.

Osorio cited the Freedom of Information Act and an executive order issued by President Duterte in 2016 that mandated the disclosure of public documents, including those involving public interest.

“We do have a lot of questions here. The problem is officials of Consolacion (town) refused to give us the documents that we need. In doing so, they might face charges for violating the laws,” she told the Inquirer.

Martinez, however, said it was still too premature for Consolacion officials to release documents about the reclamation project “due to non-disclosure agreement.”

He assured that the town had complied with all the requirements for the implementation of the reclamation project.

In an interview on Sept. 20 with Brigada News FM Cebu, Mayor Alegado explained he could not reveal the documents because he signed a “confidentiality clause.”

“We are not hiding anything here, but we are bound [to abide] to different laws. We cannot disclose to the public because we have signed a confidentiality clause,” he said.

Asked in the same radio interview if those affected by the project could ask for documents, the mayor replied: “It will be in the proper forum,” as the court.