MANILA, Philippines — Sixty-three percent of Filipino adults use the internet, with 59 percent of them logging on more than once a day, according to the survey released by Pulse Asia on Tuesday.

Per location, 84 percent of the survey respondents in Metro Manila, 65 percent in Balance Luzon, 62 percent in the Visayas, and 47 percent in Mindanao said they use or access the internet.

“The only non-majority figure is recorded in Mindanao,” Pulse Asia noted.

“Reported use of the internet is essentially constant between June 2021 and September 2021 not only at the national level but also in the different areas and classes. Again, Mindanao is the exception with a decline being recorded in this geographic area (-13 percentage points),” the polling firm added. 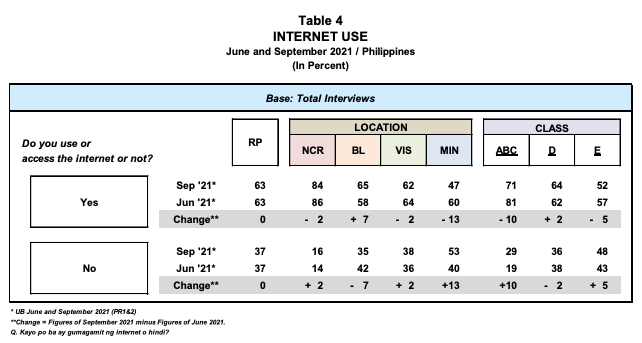 Meanwhile, 99 percent of internet users go online to check their social media accounts and 53 percent access the internet to read, watch or listen to things they’re interested about such as movies, recipes, and celebrity news.

Forty-one percent access the web to read, watch, or listen to news about the government, 24 percent to read about the elections, 22 percent to shop online, 20 percent to send or read emails, and 10 percent to online learning.

The survey likewise revealed that 99 percent of Filipino adults who access the internet use an instant messaging application, with 98 percent saying they use Messenger.

“Almost all users of instant messaging applications talk to their family members (94%) and close friends (92%) via these applications while only about a quarter communicate with their co-workers (27%) and around a third engage with groups with similar wants or special interests and hobbies (36%),” said Pulse.

“Politics is not discussed by most Filipino adults when they communicate with different groups via instant messaging applications; among those who discuss political matters with various entities, pluralities do so either once a week or less often than once a week,” it added.

Pulse Asia said the survey involved 2,400 respondents aged 18 and above and has a ± 2 percent error margin. The survey fieldwork was conducted from September 6 to 11 using face-to-face interviews.

SWS: 45% of Filipino adults use internet; 1 in 4 read news through Facebook

Out of 45 countries, PH ranks first as most obsessed with social media