MANILA, Philippines — Television remains the Filipino adults’ leading source of information about the government and politics, according to the latest survey of Pulse Asia released on Tuesday.

According to Pulse Asia, 91 percent of Filipino adults said that they get their political news from the television, with 82 percent citing national television and 25 percent mentioning local television.

Meanwhile, radio is the news source for 49 percent of Filipino adults. 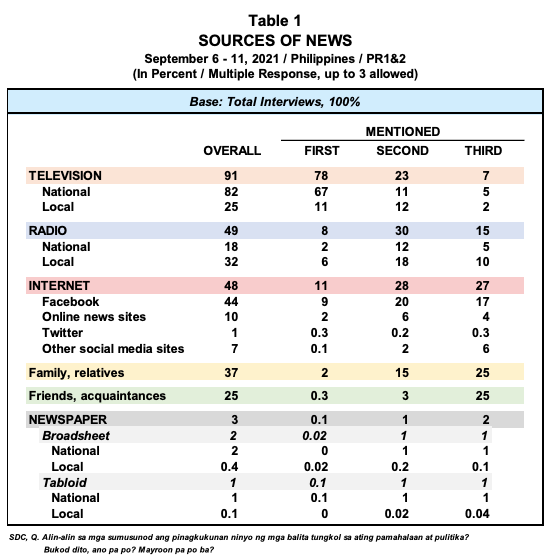 Forty-eight percent of the respondents get their news about government and politics from the internet, particularly Facebook.

Newspaper is a source of political information of only three percent of respondents, the survey showed.

“Majorities in the different geographic areas and socio-economic groupings obtain their news about the country’s politics and government from television (87% to 93% and 86% to 94%, respectively), particularly national television (75% to 89% and 76% to 87%, respectively),” Pulse in the survey results.

“From June 2021 to September 2021, there is an increase in the percentage of Filipino adults citing radio as their source of news regarding the country’s government and politics (+5 percentage points),” Pulse Asia said.

Pulse Asia said the survey involved 2,400 respondents aged 18 and above and has a ±2 percent error margin. The survey fieldwork was conducted from September 6 to 11 using face-to-face interviews.

More Filipinos say they trust ‘most news most of the time’