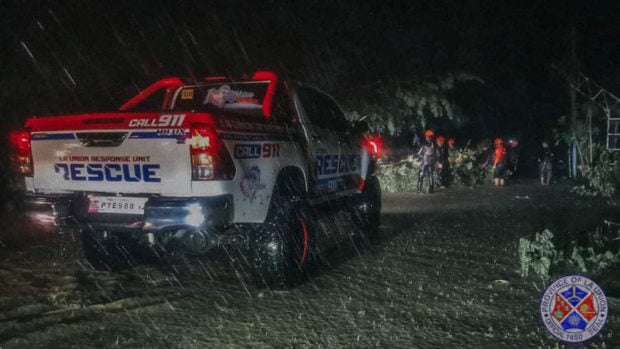 MANILA, Philippines — Malacañang on Tuesday said it is closely monitoring operations for Severe Tropical Storm Maring and assured people affected that the government is acting on all rescue and assistance requests.

“Rescue personnel and teams from the local government units are on the scene as we assure all requests for rescue and assistance are being acted upon by all relevant agencies,” presidential spokesperson Harry Roque said in a statement.

Roque noted that the Department of Social Welfare and Development has standby funds of over P128 million as of October 10.

Further, Roque advised the public to continue taking precautionary measures, among others.

“We ask the public to continue to take precautionary measures, observe minimum public health standards, and cooperate with their respective local authorities in case of an evacuation,” Roque said.

Read Next
Lacson flags discrepancy, ‘poor planning’ in DSWD’s ayuda distribution
EDITORS' PICK
A delightful blessing!
Gov’t plans to open COVID-19 vaccination for 5- to 11-yr-olds by January 2022
Gov’t eyeing COVID-19 vaccine booster for essential workers, indigents by Dec. 10
Villar Group gears up for AllValue Shopping Party on Dec. 3; around P 1-million promos and discounts up for grabs
Omicron variant detected in more countries as scientists race to find answers
Legarda: Ending Violence Against Women, a cause for all
MOST READ
Omicron poses ‘very high’ global risk, countries must prepare–WHO
Quiboloy warns of ‘much worse than Omicron virus’ if his ‘persecution’ is not stopped
Bongbong Marcos’ conviction in tax case not a crime involving moral turpitude — lawyer
Marcoleta defends pol ads on ABS-CBN
Don't miss out on the latest news and information.