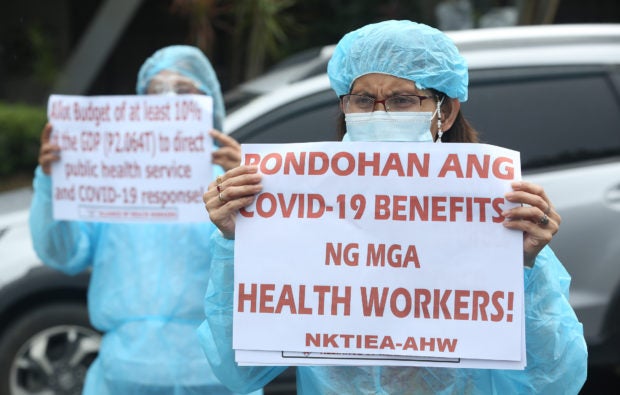 HEALTH WORKERS’ WOES Health workers from the Lung Center of the Philippines, the Philippine Heart Center and the National Kidney and Transplant Institute in Quezon City on Monday hold a picket during their lunch break to seek more funds for hospitals and medical front-liners. —NIÑO JESUS ORBETA

MANILA, Philippines — The country’s leading doctors have called on President Duterte not to obstruct the Senate investigation of the multibillion-peso pandemic supply deals and for the Department of Justice (DOJ) and the Ombudsman to probe the alleged corruption in these transactions.

The “collective expression of indignation and a call to action” issued by nearly 70 current and past officials of the Philippine College of Physicians (PCP) and medical societies last Thursday has gathered more than 300 signatures from other doctors, including at least four former heads of the Department of Health (DOH).

More doctors are joining the call, according to PCP officials, who held a virtual press conference on Monday.

“We call on the President not to obstruct the testimony of material witnesses to any investigation,” said Dr. Norbert Lingling Uy, former PCP president, reading the statement.

“We ask the President to reciprocate the risks and hard work of our healthcare workers by ordering all government personnel to divulge the truth, to undergo questioning by lawmakers. It is only right that the Office of the President should make sure there is no corruption,” he said.

The doctors called on all government officials to support the Senate investigation into why an P8-billion contract was given to Pharmally Pharmaceutical Corp., which had less than P1 million in paid-up capital, and provide testimony when asked.

They also called on the Senate to swiftly “get to the truth behind the alleged corruption” and to file any case before the DOJ or the Ombudsman as soon as possible.

The doctors said they would oppose any “attempts to withhold testimonies and cover up what really happened.”

“The Philippine College of Physicians, its past presidents, and the other people who signed this statement think that the President is actually obstructing the investigation,” Cabral said during the briefing.

Current PCP president Maricar Limpin said doctors banded together to express their “frustration and anger” at the alleged corruption in the procurement of personal protective equipment while front-liners were risking their lives during the pandemic.

“So long as we and the people do not know the truth, then the idea that there was corruption will always weigh down on the government. We need to work but we cannot work, especially the DOH, if we do not get the real answers from the DOH,” she added.

This developed as the Office of the Solicitor General (OSG) on Monday echoed President Duterte’s tirades against senators scrutinizing the questionable awarding of multibillion-peso supply contracts to an undercapitalized startup company, claiming that the Senate inquiry was not intended to craft any new measure.

“For one, there is no reference to a clear and specific piece of legislation that the investigation seeks to aid,” the OSG said in a statement.

“For another, the questions propounded during the hearings do not appear to be relative to and in furtherance of any piece of legislation,” it added.

The state law office, which described the Senate blue ribbon committee’s investigation as “telenovela-like hearings,” blasted the senators for allegedly treating the executives of Pharmally and other individuals they had summoned “worse than criminals.”

“Their obvious intent is to identify persons accountable for alleged irregularities, which existing laws already penalize,” the OSG argued.

—WITH A REPORT FROM MARLON RAMOS INQ