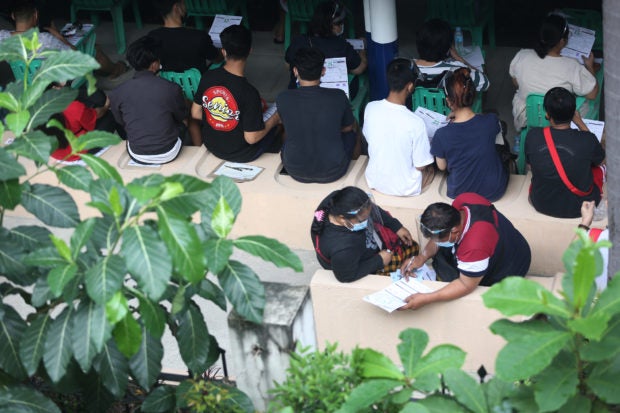 CIVIC DUTY In Pasig City, residents turn up to register as voters at the local Commission on Elections office on Monday as the poll body resumes the listup following the completion of the weeklong filing of certificates of candidacy for the 2022 national elections. The voter’s registration is extended until Oct. 30. —NIÑO JESUS ORBETA

MANILA, Philippines –Nearly 48,000 individuals and party list organizations want to vie for around 18,000 posts up for grabs in the May 9, 2022, elections.

The Commission on Elections (Comelec) received 47,853 certificates of candidacy (COC) and certificates of nomination and acceptance during the filing period from Oct. 1 to Oct. 8.

A total of 18,100 national and local posts will be contested next year, the first elections to be held amid a pandemic.

Comelec said 97 individuals were aspiring to run for president while 29 others want to run for vice president.

The 12 Senate seats that will become vacant have drawn 176 aspirants.

Meanwhile, 270 groups want to join the party list elections for the chance to take up to three seats each in the House of Representatives, for a potential 63 party list seats.

There are 733 aspirants for the 253 district representative seats in the House of Representatives.

A total of 281 individuals seek to get elected as governor and another 226 as vice governor in 81 provinces.

A total of 1,951 individuals are aspiring to become members of the 782 provincial boards.

Comelec said 4,486 individuals want to run for mayor and 3,968 others for vice mayor in 1,634 cities and municipalities.

A total of 35,636 individuals want to contest the 13,558 councilor seats that will be available.

But the Comelec still has to remove from the final list of candidates the so-called nuisance candidates. INQ