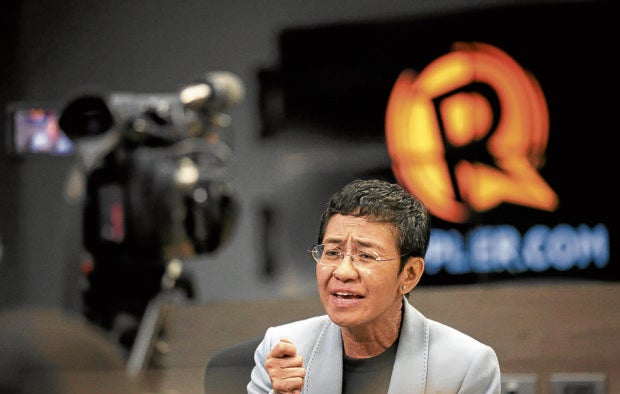 FEBRUARY 14, 2019
Rappler CEO and Executive Editor Maria Ressa back at Rappler office in Pasig City after her arrest by NBI officers February 13 and posting bail at the Manila RTC branch 46.
INQUIRER PHOTO/LYN RILLON

MANILA, Philippines — Senators on Saturday joined the outpouring of congratulations to Maria Ressa, the first Filipina recipient of the Nobel Peace Prize award.

Poe said Ressa’s award solidified her place “not only as one of the country’s journalism icons, but also all over the world.”

Poe also said that Ressa has shown “what it takes” to uphold press freedom.

Critical of President Rodrigo Duterte’s administration, Ressa and former researcher-writer Reynaldo Santos Jr. had been convicted with cyberlibel — the first journalists in the country to be convicted with such a case.

“It requires courage and constancy, especially because the pursuit of truth and justice can often be dangerous,” Poe said.

“Her unflinching trailblazing deeds, using the information platform effectively, have helped us discern beyond the news,” she added.

Senator Gordon also congratulated Ressa, lauding her for standing up for press freedom “against tyrants and evildoers.”

Gordon said in a series of tweets: “I am even prouder of your actions in every day of your life. Everyday, we are being tested but we have to show our courage and conviction to protect our values and principles. Mabuhay ka!”

Pangilinan also said that not only is Ressa’s win historic, but also a victory versus “fake news peddlers.”

(She was among the most trolled in the country, like us in the opposition.)

He added: “Maria has made journalism synonymous with courage — raising relevant issues like the weaponization of social media and speaking truth to power like Mark Zuckerberg in Facebook’s role in manipulating public perception.”

Detained Senator De Lima also lauded Ressa’s achievement, saying that her win is a “slap in the face of Duterte.”

(This is a slap in the face of Duterte, that the world is recognizing the heroism of those he oppressed.)

“Maria Ressa, by her defense of the truth in journalism, has avenged the persecution and bullying of journalists, from individual beat reporters all the way to the large collective of ABS-CBN employees who were driven out of their jobs and livelihoods out of petty reprisal by those who are offended by the truth, and the minions who lick their shoes,” she added.

De Lima continued: “It gives us all hope that in the end, truth and justice will prevail.”