Ressa and Santos are the first journalists to be found guilty of cyber libel.

“After a careful evaluation of the evidence presented by both the prosecution and the defense, the Court finds the prosecution’s evidence sufficient in establishing the guilt of both Accused Reynaldo Santos Jr. and Maria Ressa beyond reasonable doubt for violation of Section 4 (c)(4) of Republic Act 10175,” read the Manila court’s ruling.

The court has meted the penalty of six months to six years imprisonment Ressa and Santos are allowed to remain free after earlier posting bail. 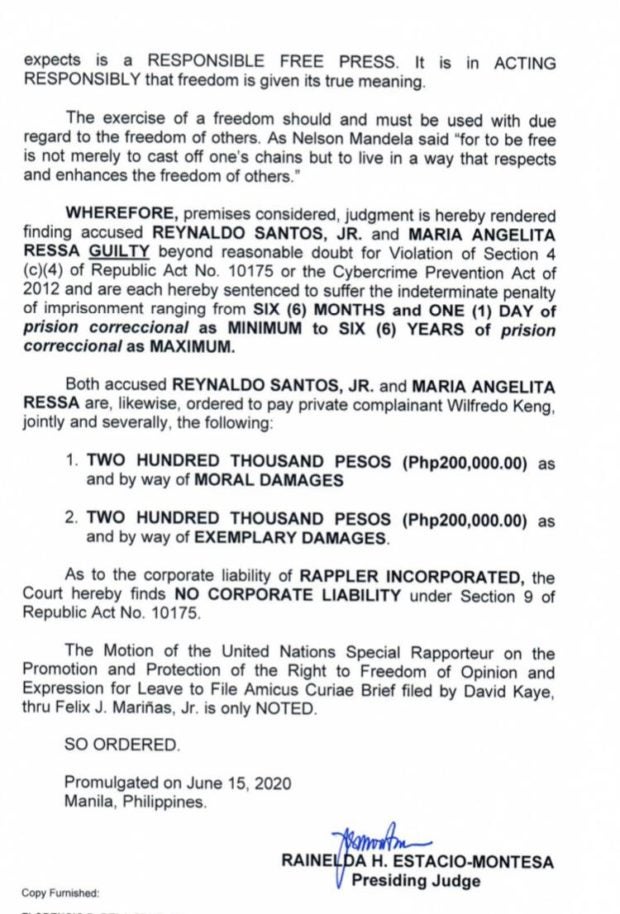 Ressa and Santos were also ordered to indemnify businessman Wilfredo Keng P200,000 in moral damages and P200, 000 in exemplary damages.

On the other hand, the court said Rappler Incorporated has no corporate liability.

The Manila court pointed out that despite its ruling, there is no curtailment of the right to freedom of speech and the press.

“Each person, journalist or not has that constitutionality guaranteed right to freely express, write and make known his opinion. But with the highest ideals in mind what society expects is a responsible free press. It is in acting responsibly that freedom is given its true meaning,” Manila RTC Presiding Judge Rainelda Estacio-Montesa said.

The subject of the cyber libel case was a 2012 article written by Santos claiming that Keng lent his sports utility vehicle to then Chief Justice Renato Corona.

The same article also cited an intelligence report that said Keng had been under surveillance by the National Security Council for alleged involvement in human trafficking and drug smuggling.

Keng filed the cyber libel complaint in 2017 or five years after the article was first posted and three years after it was supposedly re-posted due to typographical error. 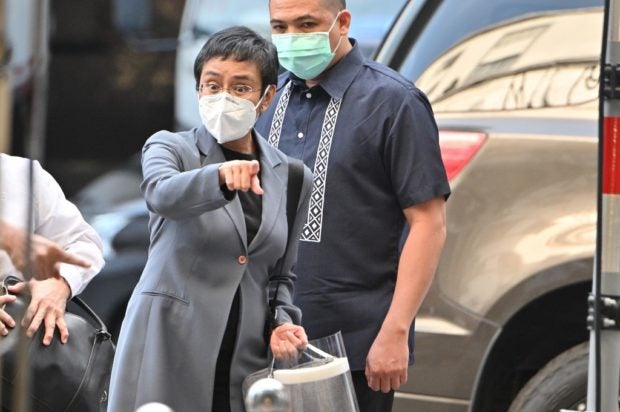 Philippine journalist Maria Ressa arrives for her court verdict at the court building in Manila on June 15, 2020. Photo by TED ALJIBE / AFP

The first guilty verdict on cyber libel was against a local politician in Zamboanga for accusing a fellow politician of being involved in “murder-for-hire” through a Facebook post which he immediately deleted.

However, screengrabs were made that led to his conviction–eight years imprisonment and damages of over P600, 000.