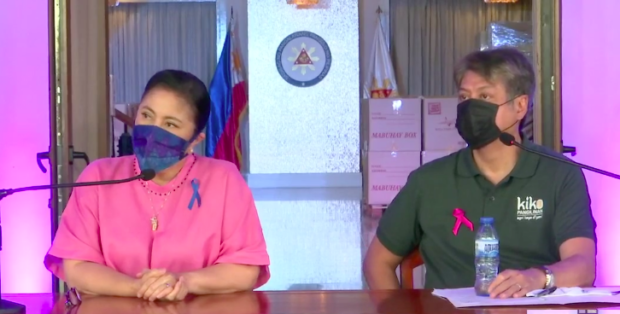 Vice President Leni Robredo and Senator Francis Pangilinan listen to questions during the announcement of the latter’s candidacy for vice president in the 2022 elections. Screengrab from Facebook/OVP

During a press briefing on Friday at Robredo’s office in the Quezon City Reception House, she introduced Pangilinan as her running mate, saying that she is confident that the Senator can address concerns and the responsibility of a higher office.

(We have known him for a long time already, he has a lot of experience in public service — as a senator, a champion of justice and human rights; as a former presidential assistant for food security and agricultural modernization; and as an advocate of farmers and fishers’ rights and welfare, he really poured himself out to improve the lives of the ordinary Filipinos.)

(And I am sure that he can adequately respond to more significant issues and a stronger call for public service. My honor is to present to you our partner in our candidacy, our vice president, none other than Senator Francis’ Kiko’ Pangilinan.)

According to Robredo, she accompanied Pangilinan earlier to file the latter’s certificate of candidacy (COC) as vice president.

(Yesterday, I declared my own candidacy for the presidency, and we immediately filed our certificate of candidacy before the Comelec, at the venue set up in Sofitel. This morning, we went back there again to accompany another candidate who will help us in this mission.)

Robredo announced her candidacy for president on Thursday, ending months-long speculations about whether she would pursue higher office in the 2022 national elections.

Then after her declaration, rumors spread that it was Pangilinan who was picked as her running mate.