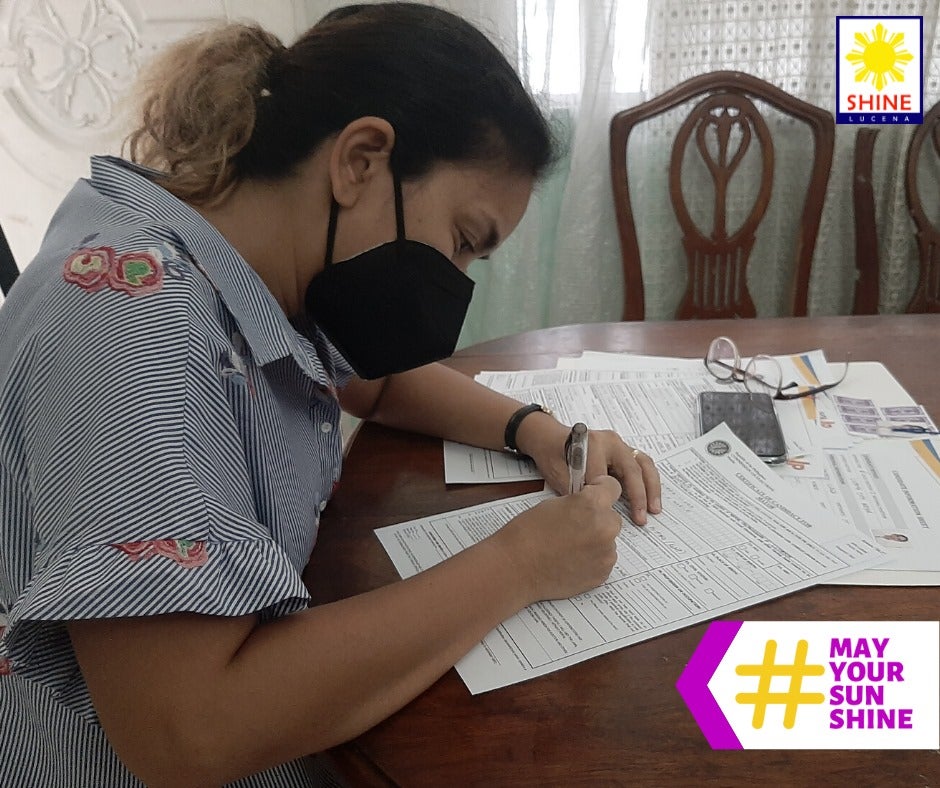 Last term Councilor Sunshine Abcede-Llaga files her certificate of candidacy for mayor of Lucena City in Quezon province on Thursday as the lone candidate of Katipunan ng Nagkakaisang Pilipino(KNP) in the city. (Photo from Abcebe-Llaga Facebook page)

LUCENA CITY––Lucena City Councilor Sunshine Abcede-Llaga filed Thursday her certificate of candidacy (COC) to formalize her bid to seek the mayoral seat in this capital of Quezon province in the 2022 elections.

Abcede-Llaga, a lawyer by profession, was accompanied by a few supporters when she arrived around 8:30 a.m. on Oct. 7 at the Commission on Elections at the Lucena City hall building.

“I have no vice mayor, no councilors slate. What’s behind me are the people of Lucena,” Abcede-Llaga, 45, explained why she was alone in the coming elections.

She added: “Lucena deserves a good leader. I’m just applying for the job.”

She called on residents to popularize the hashtag “#mayyoursunshine” to show their support for her candidacy.

Abcede-Llaga, now on her last term in the city council, is the daughter of the late human rights lawyer Ed Abcede, who was appointed officer-in-charge of Lucena City after President Corazon Aquino was swept into power after the peaceful revolution in 1986 that ousted strongman Ferdinand Marcos.

Her candidacy for mayor has long been expected here. But her chosen political party, Katipunan ng Nagkakaisang Pilipino (KNP), and not the Liberal Party (LP), took many political observers here by surprise.

She explained that another candidate for city mayor had been given the certificate of nomination and acceptance by the LP.

She did not identify the prospective LP candidate. As of Thursday morning, no LP mayoral candidate has filed a COC.

“After being denied by the LP, I’m grateful that KNP has given me the chance to serve our city,” she said.

KNP, according to Abcede-Llaga, is a newly organized national political party that supports Vice President Leni Robredo in her run for the presidency.

Alcala is the son of Mayor Roderick Alcala, now serving his last term. The father would be the vice mayoral tandem of his son.

Talaga is the son of Ramon and Ruby Talaga, who were also former mayors of the city.

Vice Mayor Philip Castillo has also declared in numerous forums that he was aspiring to replace Roderick Alcala. Castillo has yet to file his COC.