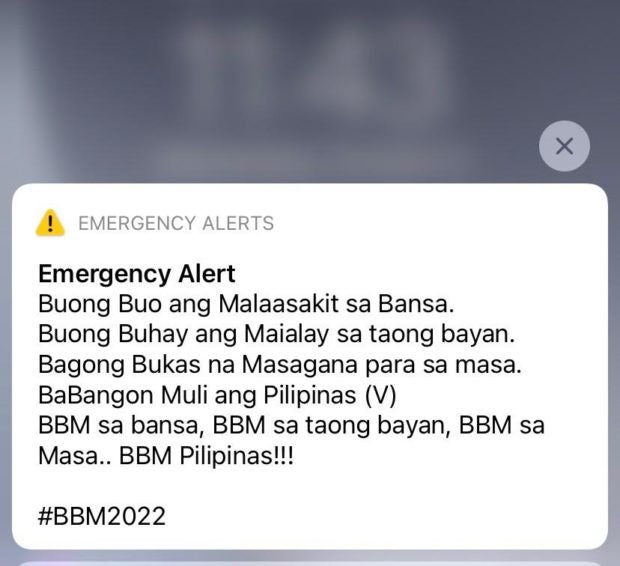 “This one is quite different and alarming in a way because this blast happened under the very noses of authorities. So this should really merit a close, deep investigation,” Liboro said in an interview on ABS-CBN News Channel on Thursday.

On Wednesday, emergency alerts popped up on mobile phones at the Sofitel Hotel in Pasay City, not for a quake or a storm, but to scream support for the son of late dictator Ferdinand Marcos, who formalized his presidential bid in 2022.

Liboro pointed out that emergency alerts usually go through a thorough process before they can be blasted out.

“Telcos were denying that it came from them and there’s a very specific protocol… Alam mo ba kung gaano karaming clearances ang pinagdadaanan niyan [Do you know how many clearances it has to go through]? From NDRRMC (National Disaster Risk Reduction and Management Council), from the source like from the weather agencies… before it gets blasted,” he said.

The NPC commissioner also surmised that the sender no longer needed a contact list to be able to blast the alerts since it was location-specific.

“When you do that, you don’t need a contact list… Those within that area would catch the message, it can be done without the use of contacts list or data bases, it will just be an SMS broadcast,” Liboro explained.

“In that respect, it’s really within the domain of the NPC, they’re using the signals to transmit or blast messages, that’s really down the alley of the NPC,” he added.

“We should all be wary and we should all take steps to prevent misuse and abuse,” he said.

The National Telecommunications Commission has already ordered an investigation into the controversial emergency alerts.

The camp of Marcos, meanwhile, distanced itself from the emergency alerts, saying it was an effort to derail the former senator’s candidacy.