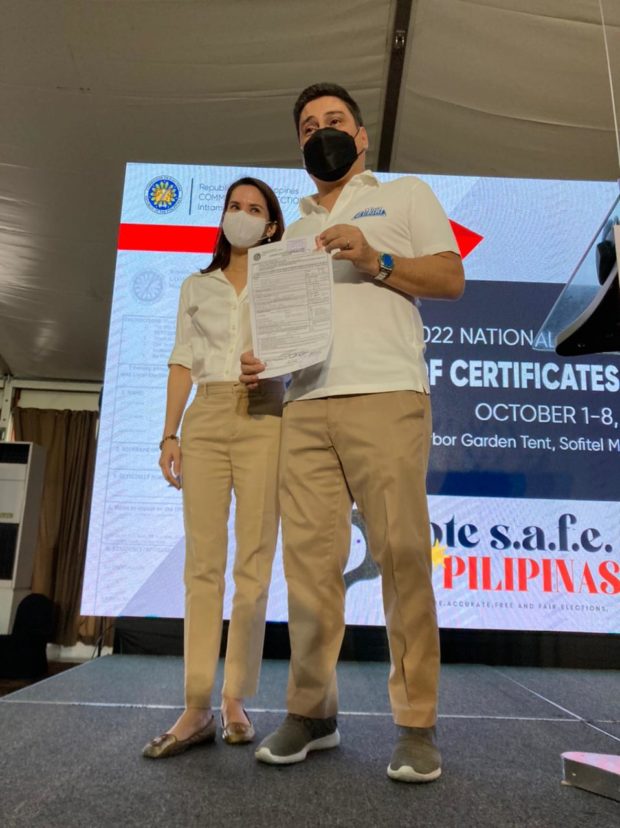 Senate Majority Leader Juan Miguel “Migz” F. Zubiri shows a receipt copy of his certificate of candidacy after filing his bid as a reelectionist senatorial candidate. He filed his COC at the Sofitel Harbor Garden Wednesday morning, joined by his wife Audrey. INQUIRER.net / Daniza Fernandez

Zubiri lodged his certificate of candidacy at the Sofitel Harbor Garden Tent at 9:16 in the morning. He will be running as an independent candidate.

After filing his COC, Zubiri called on the public to support him as he seeks another term.

(I am again asking for the support and trust of our fellow Filipinos. I am confidently telling you that Filipinos did not lose during my six years of service in the 17th and 18th Congress.)

(I fulfilled my duties efficiently. My promises when I ran in 2016 were attained. We have many laws passed.)

Zubiri also noted his track record which he said is corruption-free.

(I have no corruption issues in my almost 20 years of service.)

(I am asking our fellow Filipinos to give me one more chance to serve and I will not fail you.)

In September, the COOP NATCCO Party-List adopted a resolution supporting the senator.

Earlier, Senator Panfilo Lacson said that Zubiri is among the individuals included in their tandem ticket.