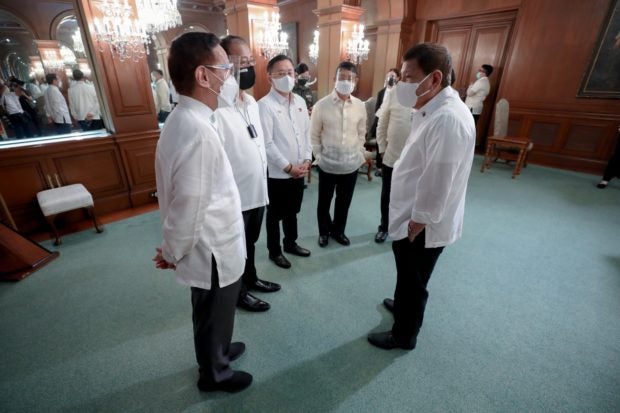 FILE – President Rodrigo Duterte with some members of his Cabinet in Malacañang. Image from Facebook/PCOO

Consequently, according to the senator, it will “do Malacañang more harm than good.”

“The ban, while appearing dramatic and tough, will be futile though because the damning testimonies that have exposed the massive corruption have come from non-Cabinet officials and instead from the ordinary rank and file [government] employees and private citizens,” Pangilinan said in a message to reporters when sought for comment on Duterte’s latest remarks against the Senate’s ongoing investigation.

“The truth will still be uncovered even if the members of the Cabinet refuse to attend,” the senator added.

It is clear, he continued, that Duterte was trying to “cover-up” what senators see as irregularities in the government’s pandemic purchases in 2020.

(This will further give Filipinos the impression that they are trying to cover up possible corruption. They are digging themselves a deeper hole.)

In a public address aired Thursday, Duterte said he has ordered Executive Secretary Salvador Medialdea to prepare the proper issuance for barring Cabinet officials from attending the Senate inquiry.

For his part, Senate President Vicente Sotto III said the chamber would respect its co-equal branch of government.

“As alter egos of the President, Cabinet members will not be ordered arrested (if they don’t attend). Respect and prudence towards a co-equal part of our Government are still alive and well on the part of the Senate,” Sotto said.

“The Constitution states ‘may request’ them to appear, so it is clear that it (their attendance) is not obligatory,” he added.

(The Senate or Congress never hindered the president from exercising his duty under the Constitution.)

Cabinet members were earlier instructed to seek Duterte’s permission before attending Senate hearings, as he will determine if the inquiry will benefit legislation.

He also told Cabinet officials to walk out from Senate hearings to “keep their dignity,” especially once they are berated.

At the height of the pandemic last year, the blue ribbon committee has been investigating the government’s purchases of medical goods, including allegedly overpriced face masks, shields and other supplies.

Senators have repeatedly questioned the Department of Health’s transfer of P42 billion to the Procurement Service of the Department of Budget and Management (PS-DBM) to procure pandemic response supplies in 2020.

A portion of this amount went to over P8.6 billion worth of contracts awarded to Pharmally Pharmaceutical Corp.

Senators doubted the firm’s financial capacity since it was only established in 2019 with a small capital of P625,000 when it secured the supply deals.

The PS-DBM and Malacañang have repeatedly defended the government’s transactions with Pharmally and denied there had been overpricing involved.

“Just to disabuse the mind of some people about corruption, it ain’t here at this time. I suppose that you are barking at the wrong person,” Duterte, for his part, said in a public address last Aug. 21.