Turkey set to clear over 80,000 mines on Iran border 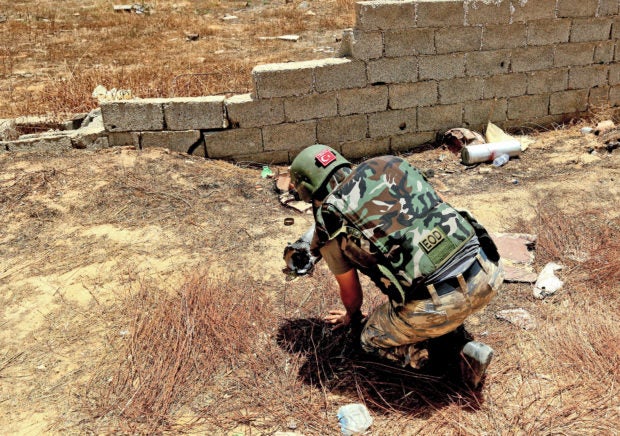 A Turkish deminer searches for landmines in the Salah al-Din area, south of the Libyan capital Tripoli, on June 15, 2020. AFP FILE PHOTO

ANKARA — Turkey has started the removal of 83,000 landmines along its eastern border with Iran as part of a two-year EU-funded project, a spokesperson for the UN Development Program (UNDP) in Turkey told AFP on Wednesday.

The 18.6 million euro project, carried out in partnership with the Turkish Mine Action Centre, will make 4.2 million square meters of land safe for local civilians and border management personnel.

The mines were put in place in eastern Turkey “between 1953 and 1996 in order to prevent illegal crossings and smuggling as well as to ensure security against the threat of the PKK”, head of communications for the UNDP in Turkey, Faik Uyanik, said.

In the 1990s, the Turkish army intensified the use of mines as part of its fight against the outlawed Kurdistan Workers’ Party (PKK), listed as a terror group by Ankara and its Western allies.

“Landmines have earned universal condemnation as the most inhumane tool for controlling borders,” UNDP resident representative Louisa Vinton said in a statement on Tuesday.

“We are so proud that UNDP Turkey is currently managing the largest de-mining project under way under United Nations auspices anywhere in the world. The large scale is testament to Turkey’s strong commitment to humanitarian border management, in line with EU standards,” Vinton said.

In all, 175 deminers backed by 16 mine detection dogs are working in four Turkish provinces for demining operations.

Some of the land cleared by the project will be open for raising livestock and farming, the main local occupations.