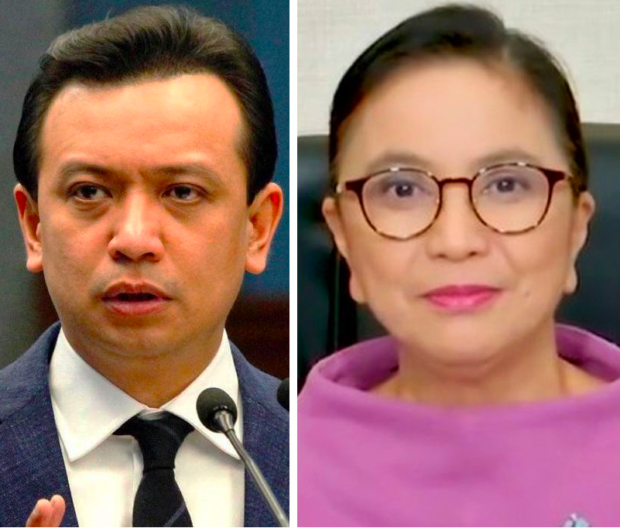 MANILA, Philippines — Vice President Leni Robredo emerged as the top choice of opposition coalition 1Sambayan to be its standard-bearer in 2022, while former Senator Antonio Trillanes IV was the top pick for vice president.

This was based on an internal survey conducted by the coalition from September 12 to 25, multiple sources told INQUIRER.net Wednesday night.

Without confirming the survey, 1Sambayan Convenor Etta Rosales stressed that the poll was “very tentative” and that the coalition has yet to build a consensus.

“This is an internal survey that is not intended for the media yet…” Rosales said over the phone.

“As I said that’s very tentative kasi there’s a process that has to be undertaken and so the process is not yet finished because that’s just the internal survey that’s initially discussed in a general assembly. Napaka tentative,” she added.

The results of the survey were presented during the coalition’s general assembly on Tuesday, according to one of the Inquirer sources.

Another source confirmed Robredo topping the list though he said he did not see the actual votes.

As early as June, however, Lacson declined the coalition’s offer to be part of its presidential nominees.

Moreno, Pacquiao and Lacson have all declared their presidential bid while Robredo has yet to decide whether or not to join the presidential race.

READ: Robredo to make final decision on 2022 run before Oct. 8

Trillanes, on the other hand, announced last May his intention to run for president but said he would give way to Robredo should the latter decide to run for the highest post.

READ: Trillanes to run for president in 2022 elections

While he was not the top choice for president, Trillanes led the same survey for vice president with 46,310 votes.

Of the four, only Sotto has formally declared his vice presidential candidacy.

Trillanes also topped the senatorial survey conducted by the coalition.