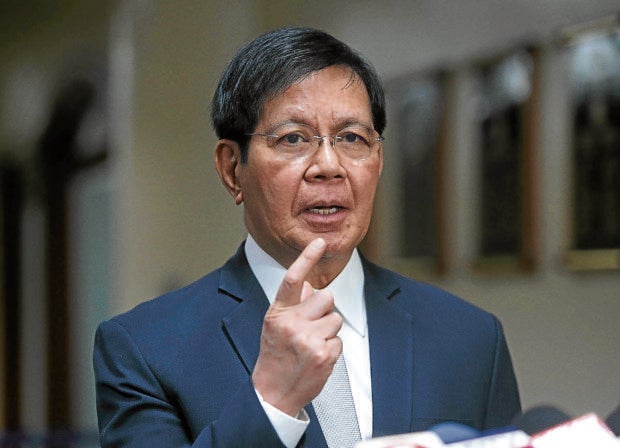 MANILA, Philippines—Senator Panfilo Lacson formally declined Tuesday the offer of opposition coalition 1Sambayan for him to be a part of its presidential nominees for the 2022 national elections.

In his letter to 1Sambayan convenor and retired Supreme Court Justice Antonio Carpio, Lacson addressed earlier invitations and requests he received from the coalition.

One of the communications from 1Sambayan invites Lacson to serve as a reactor in a town hall meeting organized by the coalition regarding national security and foreign policy on June 19. Another one was a request from 1Sambayan for Lacson to submit a 30-second video and a one-pager profile, supposedly since the senator is one of the presidential nominees under consideration of the coalition.

Lacson said his participation “will be construed as lack of propriety on my end in light of your prior pronouncements suggesting that my representation will be a ‘stumbling block’ on your political endorsements.”

“Hence, as any self-respecting public servant would do, it is my humble position to take it upon myself to graciously decline your invitation in honor of my personal and political convictions that I have consistently and unwaveringly adhered to, and in consideration of the supposed ‘inconsistency’ and ‘incongruence’ that these may entail to your political endeavors,” Lacson said in the letter.

“To this end, I still wish to express my gratitude to 1Sambayan for considering my participation in your event and my representation as one of your Presidential nominees,” he added.

Lacson said that after seeing Carpio’s television interview, “I have been under the impression that 1Sambayan colation has effectively precluded a possible association with this representation, since you made it clear, as its lead convenor, that it would be ‘inconsistent and ‘incongruous’ for the group to endorse, let alone, be identified with somebody who is one of the authors and the principal sponsor” of the Anti-Terrorism Law.

To recall, Lacson sponsored the Anti-Terrorism Law during the Senate deliberations on the measure.

“While you have explicitly and repeatedly made a remark during the interview that you have ‘no problem’ with me running again as a senator in the upcoming national elections, I could not possibly reconcile how much would be the case if it has been publicly disclosed by the former Associate Justice that his misgivings are anchored on this representation’s stand in earnestly sponsoring a measure in the exercise of my sworn duty as one of the elected lawmakers of the land,” Lacson said.

In a statement by 1Sambayan convenor Atty. Howard Calleja before Lacson publicly released the letter to Carpio, Calleja said the coalition remains “open to discussing things with Senator Ping and other well-meaning individuals.”

“We in 1Sambayan believe in unifying the opposition. We want to unite those who are against dictatorship, authoritarianism, extrajudicial killings, suppression of human rights, and subservience to foreign interests, which are the hallmarks of the Duterte administration,” Calleja said.

“However, those who do not believe in a united opposition are of course free to chart their own course,” he added.

For context, Calleja was reacting to Lacson’s statement earlier in the day that he is “inclined to decline” the coalition’s nomination offer.