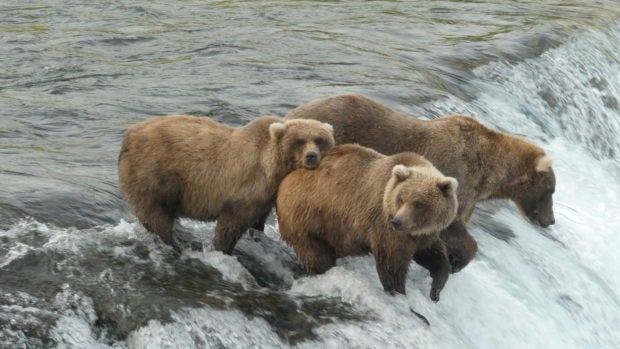 ANCHORAGE, Alaska — In Alaska, leaves are falling, daylight is dwindling and salmon-devouring brown bears are racing the clock to pack on the pounds they need to survive their winter hibernation.

Unbeknownst to the enormous bruins, some of them are also competing in Katmai National Park and Preserve’s Fat Bear Week, Alaska’s annual celebration of gluttony and nature’s abundance.

For seven days starting on Wednesday, wildlife fans will submit online votes in a playoff-style competition among 12 of the park’s fattest brown bears photographed at the salmon-rich Brooks River. The winner will be announced on Oct. 5.

The week-long online extravaganza is a joint project of the park and two nonprofit partners: the Katmai Conservancy and explore.org, a multimedia organization that operates live nature cameras around the world, most famously its Katmai “bear cam.”

Fat Bear Week grew out of a single-day promotion in 2014 that was expanded to a full week the following year. It becomes more popular each year, with online voting growing to nearly 650,000 votes cast in 2020 from 55,000 votes cast in 2018, said Naomi Boak, a Katmai media ranger.

The popularity is easy to understand, Boak said. Fat bears bring joy to people, she said.

“They get to do something and be healthy that we don’t get to do, and that is be fat,” she said.

There are Fat Bear T-shirts, coffee cups and other merchandise. There is Fat Bear school curriculum, with students tuning in to learn about biology, ecology and wildlife.

Katmai’s bears are among the biggest in the world, thanks to the abundant runs of salmon that swim into the river system from southwestern Alaska’s Bristol Bay.

Katmai’s bears, which number about 2,200, can grow to well over 1,000 pounds (453 kg) from summer feasting. They can also lose a third of their body weight during hibernation.

This year’s record Bristol Bay salmon return, which followed other recent years of big runs, has been a boon for Katmai’s youngest bears. “They benefited from being born in the time of plenty,” Boak said.

But even the older bears are looking extra-big, she said, citing as an example a 14-year-old called Walker. “He has not grown up, but he has certainly grown out,” she said.

The connection between Bristol Bay and the fish-fattened bears of Katmai is not lost on opponents of a proposal to build a massive copper and gold mine downstream from the park. The planned project, known as Pebble Mine, would threaten the survival of the salmon that sustain the park’s bruins, they say.

“It can be a reminder that the bears depend on a healthy ecosystem and the world’s greatest salmon run,” Adams said.

The Biden administration said earlier this month that it intended to resurrect an Obama-era policy that could bar development of a Pebble-type mine in the Bristol Bay watershed.