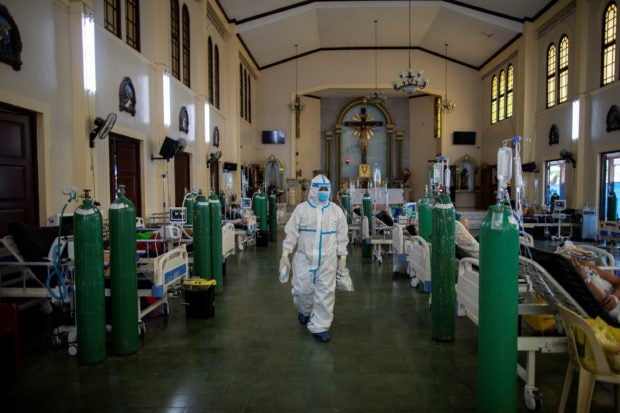 MANILA, Philippines — New COVID-19 cases in the country may decrease to around 5,000 to 6,000 per day by December, OCTA Research said Wednesday.

According to OCTA’s fellow Guido David, the country saw an average of 17,293 new daily cases from September 22 to 28, with a reproduction number of 0.96 and a growth rate of -11 percent compared to the previous week.

David said the projected decrease in cases is because the surge of infections is already ending in Metro Manila and other areas. He said that Metro Manila, which is currently under alert level 4, may be scaled down to alert level 1 or 2 by December.

“By December, cases will decrease overall. I’m guessing around 5,000 to 6,000 cases per day average in the entire country. The reason is that the surges are already ending in NCR, Calabarzon, Central Luzon, Cebu, and other major metro areas,” he told INQUIRER.net in a text message.

However, David said that some provinces may still see an increase in cases. “But the overall numbers should be lower by December,” he added.

According to David, it is possible that other regions yet to be largely affected by the Delta variant may see a surge in Delta cases in the future. He noted that, for example, it is only now that Negros Occidental is seeing a Delta surge.

Nevertheless, David said that the NCR Plus may be at low to moderate risk for COVID-19 by yearend.

He also said that the granular lockdowns and alert level system being implemented in Metro Manila are “effective,” but “vaccination is also a major factor why cases will be lower by December.”