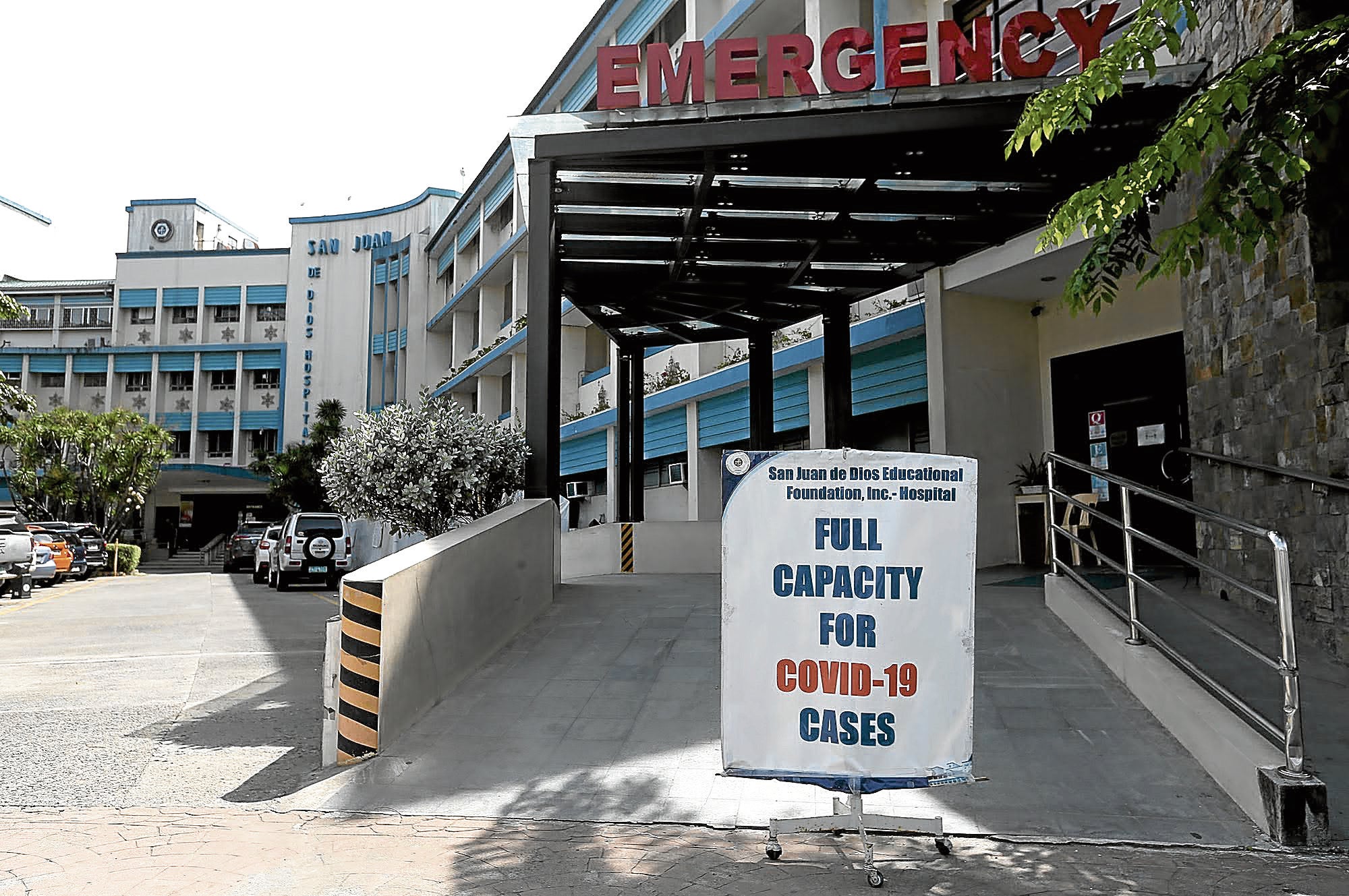 FULL CAPACITY The slowdown in the transmission of the virus is not enough reason to ease quarantine restrictions as hospitals such as the San Juan De Dios Educational Foundation Inc. – Hospital in Pasay City remain full. —RICHARD A. REYES

Metro Manila’s COVID-19 numbers have improved and the transmission of the coronavirus has been slowing down, OCTA Research fellow Guido David said on Thursday.

The latest reproduction number for the National Capital Region, which refers to the number of persons an infected person can transfer the virus to, was at 0.99, down from 1.03, he said.

“This means the transmission is slowing down, but of course, we still need to be careful because many people are still in the hospitals,” David said in a televised briefing.

However, he cautioned that the downward trend has just begun and the number of cases remained high, which means people still need to make sure they comply with health protocols.

He said infections in Metro Manila have been going down since hitting a peak of 26,303 cases on Sept. 11.

He noted that the granular lockdowns, imposed starting last week along with a new alert level system, helped reduce the number of cases.

“It’s been a week, so that means we are seeing an effect of the granular lockdown, and we have yet to see a spike in cases for now. It means the interventions we are doing to bring down the number of cases continue to be effective,” he said.

Asked if restrictions could be eased, he said the drop in the reproduction number was just the beginning of the recovery process.

He noted that many hospitals were still full and this was a factor to be considered when deciding whether or not to relax quarantine rules.

David also said it was not just in Metro Manila where the reproduction number was less than one.

In Davao City, the reproduction number was at 1, he added.

The country’s COVID-19 reproduction number has been above 1 since around the first week of July, according to reports from the Department of Health (DOH).

Based on the DOH’s COVID-19 situationers, the reproduction number dropped to less than 1, or at 0.93, in the first week of June and stayed below 1 until the end of the month.

Around that time, Metro Manila and nearby provinces had been placed under general community quarantine (GCQ) with “heightened restrictions.”

A reproduction number of less than 1 means that, on average, a COVID-19-positive individual is infecting less than one person, eventually stopping the transmission of COVID-19.

The DOH noted that the reproduction number was around 2 early on in the COVID-19 outbreak, which meant that every person confirmed with COVID was infecting two other people.

Despite the improving numbers, however, the DOH on Thursday said it was still too early to determine if Metro Manila could be downgraded from alert level 4 to alert level 3.

“We are [also] looking at other factors that may contribute to the decrease of figures in case metrics, such as laboratory testing output and active case finding,” the DOH said.

In case bulletins in recent days, the DOH has underscored that laboratory outputs for Sundays and Mondays were generally lower and could be the reason why cases have hovered between 15,000 and 17,000 cases, down from the record high on Sept. 11.

“While case metrics showed a slowdown of newly reported cases, the downgrading of alert levels from 4 to 3 may still be premature to date,” the department said.

The DOH added that the pilot alert level system with granular lockdowns was implemented less than a week ago.

“We have been repeatedly emphasizing that the trends are not cast in stone and are still dependent on the performance of the government, both national and local, and the public in the implementation and adherence to our existing protocols and policies,” the DOH said.

In its daily case bulletin, the DOH said there were still 165,790 active cases or currently sick individuals, of which 92.1 percent were mild cases, 0.7 percent in critical condition and 1.5 percent severe.

The positivity rate was still high at 24.6 percent, though lower than the previous day’s 24.9 percent. This means that of the 71,010 tested on Tuesday, nearly one in five still test positive for the virus.

The DOH said 14,090 patients have since recovered from the illness, pushing the number of survivors to 2,231,558. However, another 177 have also succumbed to the disease, bringing the death toll to 37,405.

Three laboratories failed to submit their data on time, while 77 duplicates were removed from the total case count. Another 88 cases previously tagged as recoveries have been reclassified as deaths following final validation, the DOH said.