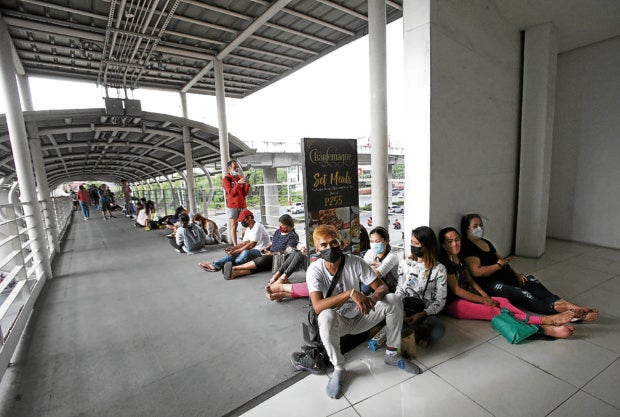 LAST-MINUTE RUSH, AS USUAL: A long line forms outside a Pasig City mall and extends up to a footbridge for a Comelec voter registration site on Monday. Amid mounting pressure from lawmakers and the general public, the poll body is expected to make a formal decision today to extend the registration period. (LYN RILLON / Philippine Daily Inquirer)

MANILA, Philippines — Under pressure from both houses of Congress, the Commission on Elections (Comelec) has agreed to extend the voter registration period for the May 9, 2022, elections until Oct. 31.

The six Comelec commissioners led by chairperson Sheriff Abas would meet on Wednesday to formally approve the extension.

Voter’s registration was supposed to end on Sept. 30.

“After consultation with Comelec officials and in consideration of the public clamor, it is likely that an extension of the period of voter registration will be granted,” Comelec spokesperson James Jimenez said on Tuesday.

On Monday, the Senate and the House passed their respective bills mandating the Comelec to extend the registration after the poll body initially refused to budge from its position against an extension.

The Senate bill extends the voter’s registration until Oct. 31 while the House said the last day of registration shall be 30 days after the law’s effectivity.

Presidential spokesperson Harry Roque said the Palace had yet to receive the final version of the bill from Congress but said there was no hindrance to it being signed into law by President Rodrigo Duterte.

“I don’t see any obstacle [to its signing] — unless there is a legal objection during the review of the Legal Department of the Office of the Executive Secretary. But I think there will be no objection,” Roque said in a press briefing.

Sen. Imee Marcos, who heads the Senate electoral reforms committee, said Comelec Deputy Executive Director for Operations Teopisto Elnas Jr. has assured them that registration will be extended for another month.

Surigao del Norte Rep. Francisco Jose Matugas II, who sponsored the Comelec’s proposed budget of P26.49 billion for 2022, also confirmed this during the House plenary deliberations on the Comelec budget.

“The Comelec will be approving tomorrow, the extension of the voter’s registration until Oct. 31,” Matugas told lawmakers.

However, the one-month extension will only apply to local voter registration, and not to overseas Filipinos who will register as voters abroad, he said.

“For overseas voters, the extension might be only for one week,” Matugas said.

“Why is it just one week for overseas voters? Won’t it be more fair if we will apply this locally and to Filipinos in other countries, who also experienced lockdowns and limitations?” Gaite said on Tuesday afternoon.

Matugas later assured the House that the poll body is willing to consider a month-long extension of the voter registration for overseas Filipinos.

“I just received information from our Comelec chairman that the proposal for a 30-day extension will be included in their considerations during the en banc,’’ he said.

Until last Friday, the Comelec had rejected appeals from various groups and legislators who said many eligible voters have been unable to register due to multiple lockdowns brought by the pandemic. There have been long lines of voters seeking to beat the deadline for registration in Comelec offices and satellite registration areas.

So far there are more than 62 million voters registered to vote in the upcoming national and local elections, according to the Comelec. There were 61,843,771 registered voters during the 2019 midterm elections. The Philippine Statistics Authority (PSA) has projected an estimated 73 million voting population by next year’s elections.

The Senate last week deferred deliberations on the Comelec’s proposed 2022 budget until it could meet to reconsider the mounting calls for an extension.

Abas insisted during the Senate budget hearing that at most, the commission could extend the registration period by one week after the period of filing of certificates of candidacies from Oct. 1 to 8. A monthlong extension was not realistic in view of some “immovable dates” concerning election preparations, he told the senators.

He cited field preparations for the grouping of voters according to precincts and the loading of data to vote counting machines. He also said Comelec workers might not survive another month of exposure to COVID-19 in voter registration sites.

—WITH A REPORT FROM LEILA SALAVERRIA