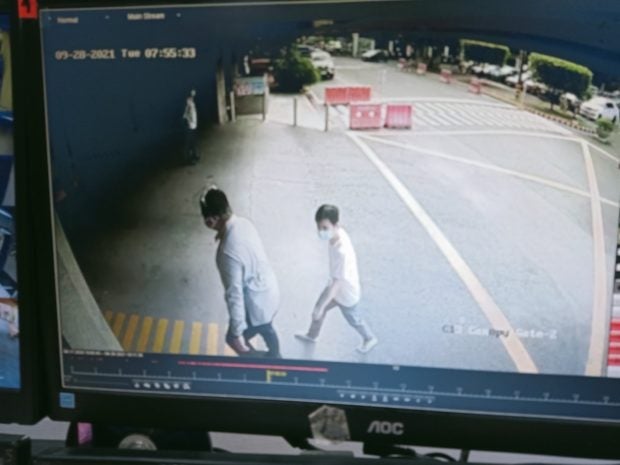 WALKING IN THE SUNSHINE: Pharmally Pharmaceutical Corp. director Linconn Ong (right) gets a little exercise and sunshine by walking around the premises of the Senate where he is detained on contempt charges for not cooperating with an investigation by the Senate blue ribbon panel. —PHOTO FROM OFFICE OF THE SENATE SERGEANT AT ARMS

MANILA, Philippines — Pharmally Pharmaceutical Corp. director Linconn Ong will likely spend the rest of the year in the Senate’s detention cell if he continues to refuse to cooperate in the senators’ investigation of his company’s multibillion-peso contracts with the government, Sen. Panfilo Lacson said on Tuesday.

“I would guess he would be spending Christmas and even New Year’s Eve in his temporary cell. It’s all up to him,” the senator said in an interview with ANC.

Ong, who is being held on a contempt citation, told the blue ribbon committee on Monday that he was declining its offer to participate in a closed-door tell-all session on the advice of his lawyer, Ferdinand Topacio.

Topacio, who called the hearings a “kangaroo forum,” also suggested that Ong would stop cooperating with the Senate inquiry.

The senators are looking into the P11.5 billion worth of contracts awarded in 2020 and 2021 by the Procurement Service of the Department of Budget and Management (PS-DBM) to the undercapitalized trading company for pandemic supplies using at least P42 billion from the Department of Health (DOH).

The bulk of the company’s contracts amounting to about P8.8 billion was with the PS-DBM, which bought the medical supplies on behalf of the DOH through negotiated purchases with Pharmally and other companies.

The transfer of the pandemic response funds was allegedly irregular as it was done without a memorandum of agreement and supporting documents, which the Commission on Audit noted in its 2020 audit of the DOH.

Also on Tuesday, reporters received an “official statement” signed purportedly by Krizle Grace Mago, another officer of the company, saying she wasn’t missing or in hiding. The Inquirer could not confirm the authenticity of the statement.

She said she was merely “processing everything that has happened” after her bombshell testimony last Friday in which she confirmed that the company had sold to the DOH damaged and soiled medical-grade face shields whose production dates had been changed to make it appear that they were manufactured in 2021 instead of 2020.

She is the company’s regulatory affairs head and one of the incorporators of the company when it was established in September 2019 with a paid-up capital of only P625,000.

The company reported zero income until it was awarded the contracts, whose total is equivalent to more than a quarter of the DOH pandemic response fund. That fact aroused suspicions of irregularity from Gordon and other blue ribbon panel members.

Ong had testified that he led negotiations with Chinese and local suppliers for the pandemic paraphernalia with help from Michael Yang, a longtime Chinese friend of President Rodrigo Duterte and who also served briefly as a presidential economic adviser.

Ong said Yang helped by acting as guarantor for the company to the Chinese suppliers and by providing a loan.

But the Chinese businessman denied this, saying he only introduced Ong to suppliers in China and friends who could give loans. He refused to identify his friends. Neither of the two men disclosed the amount loaned to Pharmally.

Gordon said on Monday that was not too concerned that Ong and Mago might turn hostile, noting that the two had already given damaging information under oath.

Lacson said Ong’s detention, which Duterte criticized in a televised address for being excessive, was well within the Senate’s rights.

“It’s done within the powers of the Senate to cite him in contempt of the committee and detain him in the premises of the Senate,” he said, adding that Ong could be transferred to other detention facilities.

“That’s how it is. He has been evasive in his answers to the senators,” Lacson said.

“As long as he (Ong) refuses to cooperate, he will stay under detention until such time we have approved the committee report if and when it is submitted by the blue ribbon committee chairman or the committee itself,” Lacson said, citing a Supreme Court 2018 ruling which allowed that.

Ong, according to Lacson, had the right to refuse to answer questions and it was also the senators’ right to detain him.

In his Monday night televised talk, Duterte said Ong’s detention was “more than martial law” in its severity.

Duterte, who was earlier accused by Gordon of lawyering for Pharmally, said the members of blue ribbon committee detained their resource person because they did not get the answers they wanted to hear.

“Is that how a civilized Congress works?” he said.

Duterte, who had scoffed at human rights advocates for questioning the thousands of killings in his drug war, said the Senate should respect witnesses’ rights and challenged rights advocates to speak out against the senators.

“The Constitution really provides that no person shall be deprived of life, liberty or property without due process of law. Is there a due process of law if you already have the preconceived answer, and if it does not dovetail your frame of mind, you send him to jail?” he said.

He was not defending the company but was just sharing his views as a lawyer, he added.

House wants him, too

At the House of Representatives, the good government and public accountability panel on Tuesday summoned Mago to appear at another hearing on its own inquiry into the Pharmally contracts on Oct. 4.

For Ong, panel chair and Diwa Rep. Michael Edgar Aglipay wrote Gordon requesting that the Pharmally director be provided with “the facility and equipment” to participate in the Zoom hearing. There was no immediate response from Gordon.

Aglipay also defended his decision to eject Rappler reporter Rambo Talabong from his personal Viber group for allegedly making a “one-sided” report on Monday’s hearing in which the congressman asked the DOH whether medical frontliners had died or gotten sick as a result of the damaged or “expired” face shields sold by Pharmally.

Aglipay said Talabong did not include “the most reportable and newsworthy information for the public,” which he said was the 36-month shelf life for face shields.

—WITH REPORTS FROM LEILA B. SALAVERRIA AND JULIE M. AURELIO