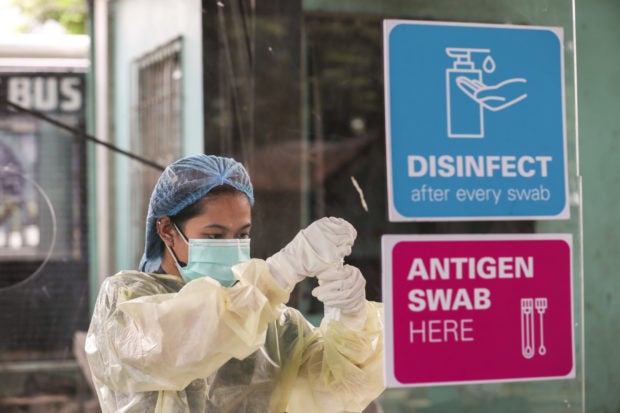 A medical frontliner from the Swab Cab initiative of the Office of Vice President Leni Robredo returned to Imus, Cavite offering free antigen testing in identified areas to help in local government efforts against COVID-19. Photo by Jay Ganzon / OVP

Health Undersecretary Maria Rosario Vergeire said the DOH is just validating whether the positive results from antigen tests that were reported to the department were based on proper use of such tests.

The DOH has earlier observed a lower number of COVID-19 tests being conducted in the country. Vergeire said this may be due to improper use of rapid antigen tests that are not being reported to the DOH.

She noted that out of the almost 6,000 positive test results from antigen tests that were reported to the agency, only around 300 tests were conducted based on its proper use.

“People are using it for screening, borders, screening for work, screening for certain activities, and that is not the right or proper use of antigen at baka magkaroon tayo ng (and we may get) inaccurate results,” said Vergeire.

Vergeire said the reporting of antigen test results should not be voluntary.

(It should be a requirement for local governments to report to us the rapid antigen test results. They should be able to gather all reports on its use.)

She added that the DOH is coordinating with the Metropolitan Manila Development Authority and the National Task Force against COVID-19 for the accurate reporting of antigen test results.

(We have a specific reporting system for that which we will share to LGUs so we can make this official and a mandate that all who use antigen tests will report results to the government.)