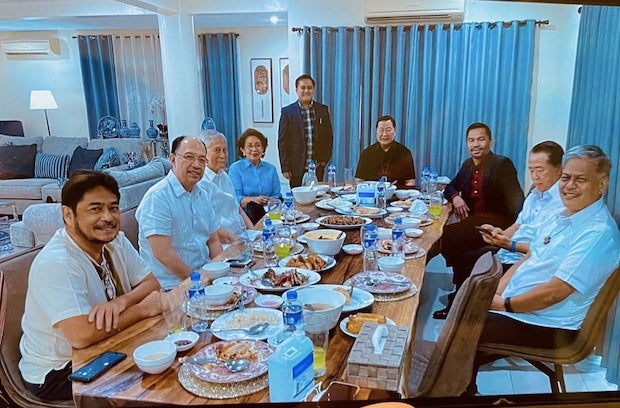 Sen. Manny Pacquiao, who had already announced his intention to run for president in 2022, meets with some of the convenors of the opposition coalition 1Sambayan. With him (starting from left, clockwise around the table) Fr. Albert Alejo, SJ, of Ateneo de Manila, lawyer Howie Calleja, former Foreign Secretary Albert del Rosario, former Ombudsman Conchita Carpio Morales, former Supreme Court Associate Justice Antonio Carpio, and (at right, end of the table) former Education Secretary Bro. Armin Luistro, FSC). To Pacquiao’s left is former Bacolod Rep. Monico Fuentevella (who is not a 1Sambayan convenor). (Photo from the Office of Sen. Manny Pacquiao).

MANILA, Philippines — Leaders need to unite for the 2022 elections to ensure the country’s survival, Sen. Manny Pacquiao said at a meeting initiated by organizers of the opposition coalition 1Sambayan.

“The unity talks initiated by 1Sambayan are a welcome development. This call for unity is truly urgent because the survival of our nation is at stake,” Pacquiao said, partly in Filipino. in a statement.

“I am open to these talks especially if the goal is to push for any step towards unity and for the improvement of the country,” Pacquiao went on.

“I believe that our leaders need to have an open mind and give importance to the welfare of each Filipino and not only their own personal ambition,” he added. “We must unite for the greater good. We must unite because in unity there is victory.”

Several sectors have been urging Pacquiao, Vice President Leni Robredo, and Manila Mayor Isko Moreno to form a united opposition slate that would have a bigger chance of winning in the elections.

Earlier, Pacquiao and former Bayan Muna Rep. Neri Colmenares, another 1Sambayan convenor who was Robredo’s batchmate at the House of Representatives, asked the three to discuss the matter.

Robredo had conducted separate discussions with Pacquiao and Moreno about a possible coalition. But when she tried to set up a meeting together, the discussions fell apart when both men announced their intention to run for president.

READ: ‘It’s time for the downtrodden to win,’ Pacquiao says on declaring bid for presidency

In an interview with Radyo Katipunan on Friday, Robredo was asked about how near was she to bringing the opposition together into a single force.

“I don’t know if my assessment is right, but we were this close,” she said in Filipino, making a gesture with her thumb and forefinger close to each other without touching.

But she added: “I have not given up. For me, if there are some who really would not want to [join a united slate] or really closed [to the idea], we can still listen to those who still have left an opening.”