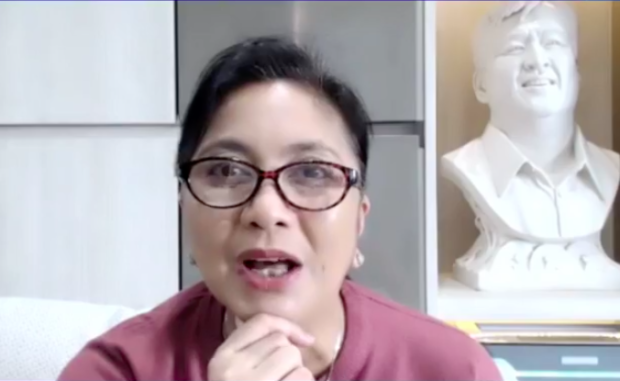 MANILA, Philippines — Vice President Leni Robredo admitted her heartbreak over candidates starting their own campaigns but reassured the public that she wouldn’t let up on her vision of unifying the opposition.

Asked by Radyo Katipunan on Friday whether she had made much progress toward uniting the opposition, Robredo responded by making a small gesture with her fingers.

Robredo has long advocated a united opposition slate for 2022, talking to Senators Panfilo Lacson and Manny Pacquiao, and then Manila Mayor Isko Moreno.  They have all, however, declared their candidacy.

(I don’t know if my assessment is right, but we were this close.  That’s why it is really heartbreaking for me.)

(But still I have not yet given up.  For me, if some have closed their doors already, I will try to convince those who are still open to discussions to sit down and talk.)

When asked how much she and the other candidates like Pacquiao and Moreno have discussed and agreed upon, the Vice President said they agreed on some points — especially on the need to replace the current administration.

But in terms of their stand about the Marcoses’ plan to return to power, Robredo said she is unsure whether they have discussed the issue.

“Nire-recall ko kasi ang dami ko nang nakausap, hindi ko maalala if I was able to discuss to all of them the Marcos issue, so hindi ko sigurado kung it was brought up in some of the discussions, pero I’m not very sure kung sa lahat,” Robredo said.

(I am trying to recall because I have talked to a lot of people, but I cannot remember if I was able to discuss to all of them the Marcos issue, so I am not sure whether it was brought up in some of the discussions, but I’m not very sure if it was discussed with everyone.)

(But the criticism that the situation today is not looking good, that the regime should be replaced, that was very clear.)

In the early portion of the interview, Robredo said that two of her concerns regarding a possible presidential run are stopping the return of the Marcoses to Malacañang, as well as preventing a Rodrigo Duterte-style of governance.

Robredo said she would gladly step away from the presidential race if these two conditions are met, regardless of her supporters’ reaction.

Recently, there have been questions about whether Moreno shares the same views with Robredo and the opposition about the Marcoses after the local executive said that the family of the dictator and former president Ferdinand Marcos should be given a chance to explain themselves.

As of Friday, almost all of the top contenders who are expected to run for president in 2022 have declared their intentions, including Senator Panfilo Lacson as the first to do so, Senator Manny Pacquiao, Manila Mayor Isko Moreno, and former senator Marcos.

While she has not yet decided on her next political step, calls for Robredo to run for president in 2022 are growing on social media. Neri Colmenares, a former lawmaker, and activist, suggested that Moreno and Pacquiao resume discussions to form a unified opposition force.

Previously, Robredo also opened the possibility of running for a local position in Camarines Sur, but only if matters at the national level are ironed out.