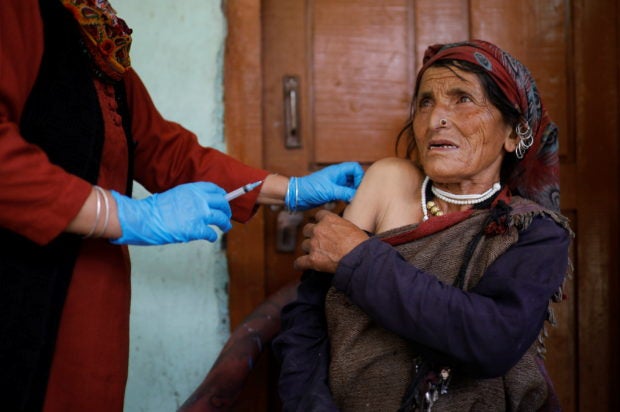 Kamla Devi, 58, a health worker, gives a dose of the COVISHIELD vaccine to a villager, as part of a vaccination drive during the coronavirus disease (COVID-19) outbreak, at Malana village in Kullu district in the Himalayan state of Himachal Pradesh, India, September 14, 2021. “People were initially scared to take the vaccine, worried they would fall sick or die,” said village head Rajuram. “Then I took it and others also mustered the courage.” REUTERS/Adnan Abidi

MALANA, India — To visit the Indian village of Malana deep in the Himalayas, a COVID-19 vaccination team scrambled over a landslide that blocked the road the day before, scaled a retaining wall, and then began a three-hour trek down and up a river valley.

Despite the hostile terrain, the northern state of Himachal Pradesh, where Malana is located, earlier this month became the first in India to administer at least one COVID-19 vaccine dose in all its adults.

The steep topography was one challenge overcome by health workers walking for hours or days to reach remote villages and another was religious beliefs, as the tourism-dependent state immunized its roughly 5 million adults.

On September 14, a team of five led by district health officer Dr. Atul Gupta set out to Malana to administer second vaccine doses.

Blocked by the landslide, they left their vehicle with two blue vaccine boxes slung over their shoulders to maneuver over the rubble, climb the wall and then walk to the trailhead leading to the village, accompanied by a Reuters photographer.

Before beginning the trek to the village, Gupta and his team placed the boxes onto a gondola connected to pulleys to carry the medicine across the river gorge that separates Malana from the road. That lightened their walk considerably as they set off to cross the gorge which drops down about 100 meters (330 feet).

During a rest break on the trek, Gupta said that to convince Malana’s 1,100 adults to take their first shots in August, its district chief had priests invoke a local Hindu deity. This helped health workers cover up to 700 people in three days, he said. 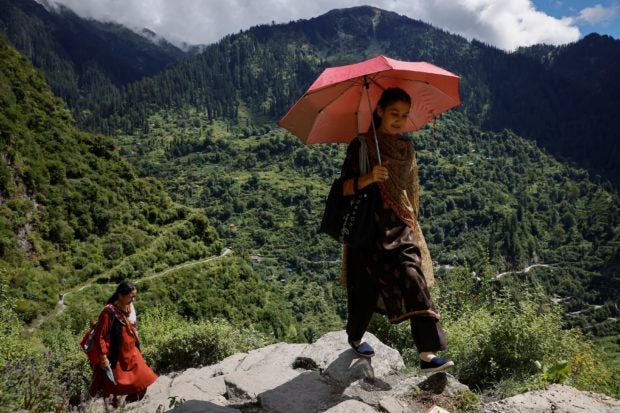 Health workers Kamla Devi, 58, and Kanta Devi, 26, trek through the mountains to vaccinate people in remote villages during a vaccination drive against the coronavirus disease (COVID-19) outbreak, near Malana village in Kullu district in the Himalayan state of Himachal Pradesh, India, September 14, 2021. Despite the hostile terrain, the northern state of Himachal Pradesh became the first in India to administer at least one COVID-19 vaccine dose in all its adults. The steep topography was a challenge overcome by health workers walking for hours or days to reach remote villages. REUTERS/Adnan Abidi

When Gupta’s team reached the village on September 14, nearly three dozen people, who took their first shots before the invocation, lined up to get their second shots just opposite an ancient temple to the deity.

“People were initially scared to take the vaccine, worried they would fall sick or die,” said village head Rajuram, who gave just one name, sitting by the carved wood and concrete walls of the temple. “Then I took it and others also mustered the courage.”

India wants to vaccinate nearly all of its adults by December, having administered at least one dose to two-thirds of people and two doses in less than a quarter. Thakur wants Himachal Pradesh to be the fastest state to reach the two-dose milestone, hopefully by November.