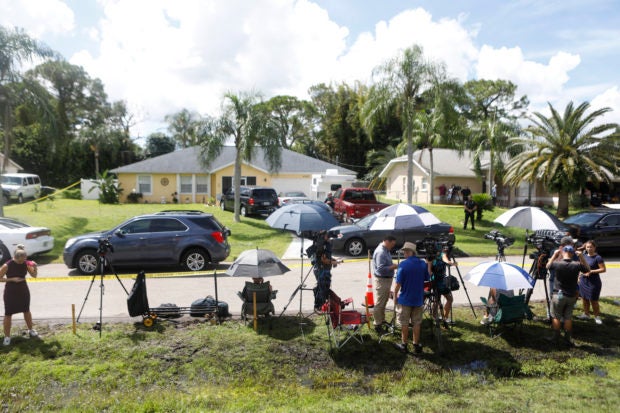 (FILES) In this file photo taken on September 20, 2021, members of the media are lined up near the home of Brian Laundrie, who is a person of interest after his fiancé Gabby Petito went missing, in North Port, Florida. – The disappearance of Gabby Petito has aroused a rare and torrent media interest, re-launching the debate on what explains, or not, such a level of media exposure. The discovery of her body in Wyoming and the classification of her death as a homicide have been widely reported, going far beyond US borders. (Photo by Octavio Jones / GETTY IMAGES NORTH AMERICA / AFP)

Washington, United States — US authorities on Thursday issued an arrest warrant for Gabby Petito’s boyfriend after her body was discovered in a homicide case that drew international headlines over her disappearance and death.

Petito’s family filed a missing person report on September 11 after she mysteriously vanished during a road trip with partner Brian Laundrie, who returned home to Florida without her.

The FBI said an arrest warrant was issued by a court in Wyoming, where Petito’s body was found on Sunday. It cited alleged credit card fraud in the court filing.

Petito, 22, had quit her job and packed her life into a camper van for a cross-country adventure with Laundrie, starting in July, documenting their journey in a stream of social media posts.

But after Petito went missing and as a massive hunt was launched, Laundrie, 23, was declared a “person of interest” in the case. He declined to cooperate with the police before disappearing himself.

The FBI appealed for anyone who had information about Laundrie’s whereabouts to contact them and said it was seeking details from users of the Spread Creek camping ground in Wyoming at the end of last month.

“No piece of information is too small or inconsequential,” FBI agent Michael Schneider said.

A coroner on Tuesday confirmed the identity of Petito’s body and said the manner of death was a homicide.