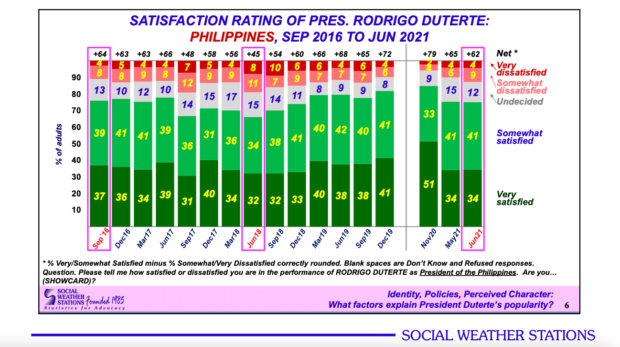 MANILA, Philippines — The net satisfaction rating of President Rodrigo Duterte dropped to +62 as he spends his last year in office and amid the COVID-19 pandemic, said the Social Weather Stations (SWS) on Thursday.

This came after the SWS released three brackets of survey results showing a downward trend in his satisfaction rating in November 2020, May 2021 and June 2021.

The following are the satisfactory rating in the three survey results released by the SWS:

The survey also shows that Duterte’s latest satisfaction rating of +62 is down by 2%, compared with the +64 in September 2016, just a few months since he started in office.

Despite the latest drop, however, Duterte also got his highest net satisfaction rate at +79 in November 2020.

SWS fellow and political science professor Jorge Tigno explained that this high rating may have been attributed to the fact that in November 2020, people were under the impression that the spread of the COVID-19 virus had been contained.

“I would situate that in that context when people were sensing that, ‘okay this is now starting to be over and we’re relieved this has happened and that we’re satisfied with what the government has done,’” Tigno said.

SWS fellow and economics associate professor Geoffrey Ducanes, however, said that most Filipinos didn’t think that the Duterte administration was failing to respond to the pandemic, based on SWS data.

SWS fellow-in-residence and board member Steven Rood said that 69 percent of families received aid based on their data in 2020. This is higher in comparison to 2021, when the so-called “NCR-Plus” was placed under lockdown, where 79 percent of Metro Manila families got assistance, while only 65 percent of the families in other areas received aid.

“So a lot of people got money directly from the government during that time period,” Rood said.

Asked why the release of the results were delayed, Ducanes explained that because of the COVID-19 pandemic, the November 2020 survey was conducted on a phone-based interviews instead of face-to-face interviews.

“And then later on, the thinking was that, well maybe before we release this we should try to understand what’s driving this satisfaction rating,” he added.

Rood, on the other hand, said that because the effects of the pandemic may have had an effect on the satisfaction ratings, “we wanted to make sure that that was studied first before we went back to releasing it.”

This is the first time the SWS delayed the release of its presidential satisfactory rating, opting instead to put out three batches in one go.