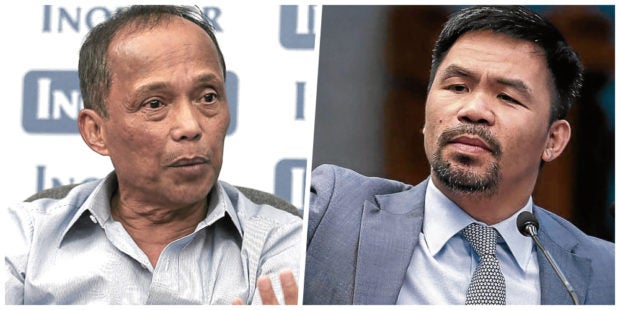 MANILA, Philippines — The Commission on Elections (Comelec) has ordered the group of Senators Manny Pacquiao and Aquilino “Koko” Pimentel III to answer the petition of the PDP-Laban faction led by Energy Secretary Alfonso Cusi to have their wing declared as illegitimate.

The PDP-Laban faction led by Cusi earlier filed the petition before the Comelec against Pimentel and Pacquiao’s group, asking the poll body to junk the “unauthorized” sown information update statements, which contained the list of officers, submitted by the Pacquiao-Pimentel faction.

They also asked Comelec to stop Pacquiao, Pimentel, and their allies from committing acts that would “run against the constitution of PDP-Laban and usurp the authority of the legitimate officials of the ruling party” through a temporary restraining order or a writ of preliminary injunction.

The Comelec En Banc ordered the Pacquiao-Pimentel camp to file their response on the Cusi faction’s petition within five days upon receipt.

Both parties are likewise directed to comply with Comelec Resolution No. 10673, which provides that the poll body will continue receiving via email, petitions, verified pleadings, memoranda, comments, briefs, and other submissions, in PDF format.

The Cusi wing has called on the Comelec to declare “soonest” which of the two factions of the PDP-Laban is the legitimate representative of the party.

The PDP-Laban has been split into two factions as supported by two different candidates in the 2022 elections.

The Cusi wing proclaimed Senator Bong Go and President Rodrigo Duterte as its standard-bearers in the 2022 elections. The President accepted the nomination but Go however declined.

Meanwhile, the Pimentel camp declared Pacquiao as its presidential candidate.