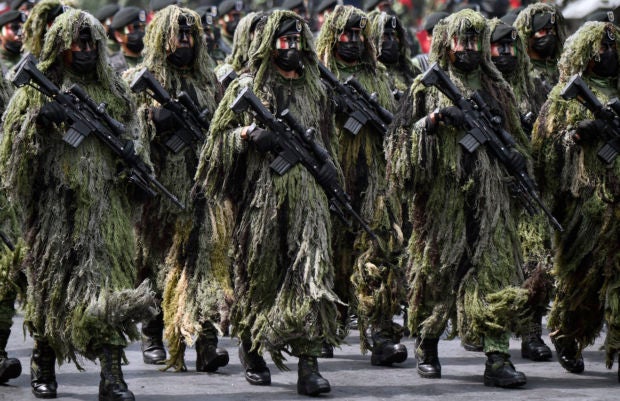 Special forces of the Mexican Army take part in the military parade for the 211th anniversary of the Independence Day at the Zocalo Square in Mexico City on September 16, 2021. AFP

MEXICO CITY — Mexico this month celebrates 200 years of independence from Spain, the former colonial ruler with which it has a “love-hate” relationship today.

Most Mexicans have a mixed European and indigenous ancestry and have contrasting feelings about the violence of the conquest, which imposed culture, language and religion on the country.

Spain is thus seen as both the motherland and the enemy.

“There is this love-hate, but it depends on the social scale. Among the middle and upper classes we see this ambivalence, but in the lower classes the hatred is deeper,” historian Lorenzo Meyer told AFP.

The relationship between the two countries’ governments has also seen ups and downs, he said.

The Spanish benefited from good relations during Mexican dictator Porfirio Diaz’s 1884-1911 rule, but distanced themselves from the upheaval of the 1910-1920 Mexican revolution.

Aside from politics, Spain has given Mexico “cultural salvation” from American influence, Meyer said.

There is a passion in Mexico for bullfighting and music, with popular songs like “Madrid” and “Granada” penned in the 1930s by Mexican composer Agustin Lara.

The affection is mutual, said Mikel Alonso, a chef of Basque origin who has Mexican nationality.

“In my hometown when people sing there are only two types of songs — the deep and nostalgic Basque and the happy ranchera,” he said.

Mexico provided refuge to Spanish anti-Franco Republicans, who even established a government in exile in the Mexican capital between 1939 and 1946, and had diplomatic representation until the 1980s.

“Franco was never recognized. The Republican embassy here was the one that endured the most in the world,” Meyer said.

“They lived with the fiction that there was a Republican ambassador but there was a representative of Franco (in the Portuguese embassy) who was really the one who ran the daily business,” he added.

Mexico hosted around 20,000 Republicans, including intellectuals who propped up educational institutions.

“The welcome given to the Spanish Republican exiles will never be forgotten,” said Carlos Martinez Shaw, of the Royal Academy of History in Madrid.

“They were received with open arms in Mexico,” he added.

At the beginning there was reluctance from the Republicans and even a demand that their children have Spanish teachers, Meyer said.

“They came not out of love, but out of force. Mexico offered them asylum and gave them facilities. They had nowhere to go,” he said.

One exile was Angel Sarmiento Gonzalez, a Republican deputy who promoted agrarian reform.

Pursued by Franco, he came to Mexico in the 1940s with a wife and five children.

His granddaughter, Veneranda Merino Sarmiento, remembers the gratitude towards Mexico, but also some resentment at times.

“There was always someone calling us gachupinas,” a disparaging Mexican name for Spaniards, she said.

“But they also despised Mexicans, calling them ‘Indians,'” he added.

The resentment resurfaced after Mexican President Andres Manuel Lopez Obrador in 2019 demanded that Spain apologize for the events of the conquest.

Mexican constitutional lawyer Francisco Burgoa sees the demand as at odds with the 1836 Calavatra treaty, the definitive recognition of Mexican independence.

The agreement “puts an end to any dispute or claim between the two countries,” he said.

Jesus Bustamante, a historian with Spain’s Higher Council for Scientific Research, sees the request as part of “nationalist rhetoric” at a time when Mexico faces myriad domestic challenges such as criminal violence.

“Perhaps what is happening is that addressing these rhetorical and identity issues and calling Spain to account is a kind of distraction,” he said.

But there are also still “open wounds,” Meyer argued.

In Lopez Obrador’s logic, “representing the grievances of the popular classes is not harmful, on the contrary,” he said.