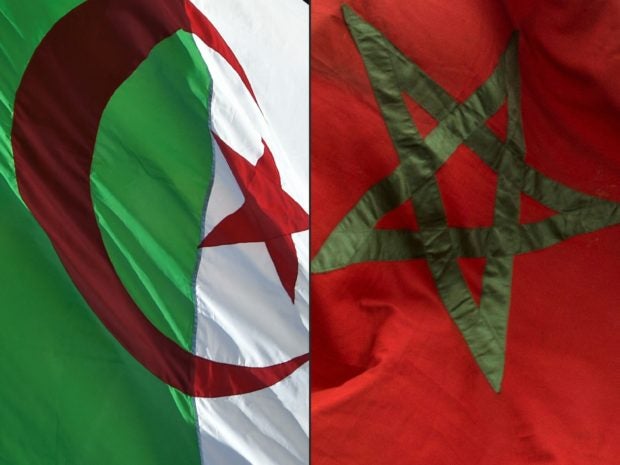 (FILES) This combination of pictures created on August 27, 2021, shows the national flags of Algeria (L) and Morocco. (Photos by RYAD KRAMDI and FADEL SENNA / AFP)

Algiers, Algeria — Algeria said Wednesday it has closed its airspace to all Moroccan planes due to “provocations and hostile practices” by its neighbor, in the latest dispute between the countries at odds mainly over Western Sahara.

The move comes after Algeria broke off diplomatic ties with Morocco on August 24, accusing it of “hostile actions” following months of heightened tensions between the two North African countries.

Morocco called the severing of ties “completely unjustified” and said the decision was based on “false, even absurd pretexts”.

Relations between the neighbors have been tense for decades due to Algeria’s support for the Polisario Front, which demands a self-determination referendum in Western Sahara, while Morocco, which controls around 80 percent of the desert territory, has offered only autonomy.

The Algerian presidency said in a statement on Wednesday the decision had been made “to shut its airspace immediately to all civilian and military aircraft as well as to those registered in Morocco.”

The decision was announced after a meeting of the High Security Council chaired by President Abdelmadjid Tebboune.

The presidency said the meeting examined the situation on Algeria’s border with Morocco and took into account “the continuation of provocations and hostile practices by Morocco”, without providing details.

The decision will not have a major immediate effect because Algeria closed off air links in March due to the COVID-19 pandemic, reopening to seven countries in June — of which Morocco was not one.

A source close to the state-owned carrier Air Algerie said no direct commercial flights between Algeria and Morocco had flown since.

“Algerians traveling to Morocco transfer via Tunis,” the source said on condition of anonymity.

The decision will more immediately affect Moroccan flights that have routes over Algerian territory.

“This is a civilized way of putting an end to a situation that could not last anymore without running the risk of costing more casualties and taking the two countries into a path that would not be desirable”.

In July, Morocco’s King Mohammed VI deplored the tensions and invited Algeria’s President Abdelmadjid Tebboune “to make wisdom prevail” and “work in unison for the development of relations” between the neighboring countries.

Earlier this month, more than 200 Moroccan and Algerian civil society figures appealed for a “return to reason” after Algiers’ decision to cut diplomatic ties.

Intellectuals, academics, and other civil society actors, most of them Moroccan, signed a petition rejecting the “current situation which could lead to an unnatural confrontation… contrary to the interests of the two peoples and the region”.

Algeria is the key foreign backer of the Polisario Front, which has for decades fought Morocco for the independence of Western Sahara.

Morocco sees the former Spanish colony as an integral part of its territory.

Algiers was also angered by Morocco’s normalization of ties with Israel last year as a quid pro quo for US recognition of Moroccan sovereignty over Western Sahara.

Rabat had severed diplomatic relations with Algeria in 1976 for several years after Algiers recognized the Sahrawi Arab Democratic Republic (SADR), proclaimed by the Polisario.

The border between the two countries has been closed since 1994.