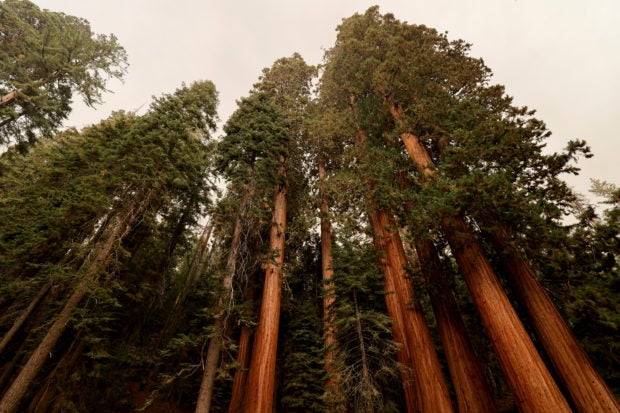 California fire crews have so far succeeded in protecting a group of ancient giant sequoias threatened by a wildfire raging through a national park in the Sierra Nevada mountain range, authorities said on Monday.

The sequoias dubbed the Four Guardsmen remain unscathed by the so-called KNP Complex fire, which was ignited by lightning earlier this month and has grown in recent days in the Sequoia National Park’s Giant Forest.

“As far as damage to any specific sequoia trees, the older growth ones, there is none so far,” KNP Complex fire spokesperson Mark Garrett said of the Guardsman and the nearby General Sherman, the world’s largest tree.

The huge Guardsmen trees mark the entrance to the Giant Forest, a grove of some 2,000 sequoias. The General Sherman, which stands at 275 feet (83 m), or about the height of a 20-story building, is located about 2.5 miles (4 km) northeast.

Fire-resistant coverings wrapped around their bases have them kept safe from the blaze, parks officials said.

The KNP Complex fire is one of 13 wildfires currently burning in California, which typically has experienced its peak fire season in late summer and fall. The state is on pace to see more of its landscape go up in flames this year than last, which was the worst year on record for the state.

On Monday, fire crews searched for and extinguished small spot fires caused by embers from the KNP Complex while tree fellers cut and cleared dead trees and dry vegetation in the forest. National Guard members were also cleaning up in the area after prescribed burns, Garrett said.

The KNP Complex, about 250 miles southeast of Sacramento, the state’s capital, had burned some 23,700 acres (9608 hectares) as of Monday, according to the federal Inciweb information system. The fire, which remained 0% contained, grew by about 1,700 acres since Sunday.

The effort to battle the blaze may be hindered during the next several days by dry and windy weather conditions, fire officials said.