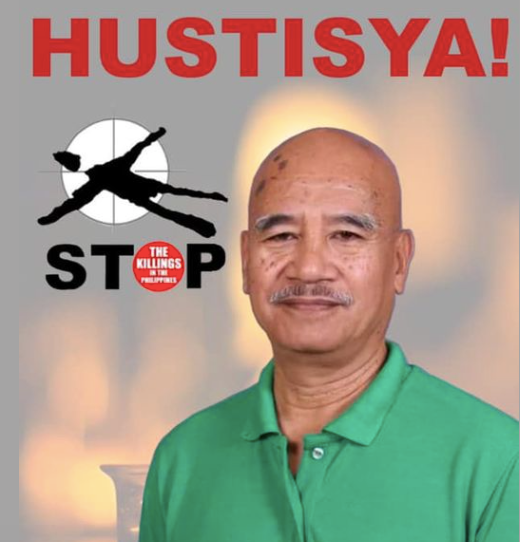 A poster of NUPL lawyer Juan Macababbad uploaded by the human rights group Karapatan in its Facebook page.

MANILA, Philippines — While the Commission on Human Rights (CHR) assured the House of Representatives that it is already looking into the latest attack against a lawyer, it also admitted that budgetary constraints have delayed their actions as they do not have a wide reach.

CHR Chairperson Jose Luis Gascon said on Thursday that they are aware that National Union of People’s Lawyers (NUPL) vice chair and lawyer Juan Macababbad was killed on Wednesday, adding that they have notified their director for protection about the incident.

But Gascon told the House committee on appropriations during the deliberation of CHR’s budget that they only have regional offices — which means their personnel at the regional office in Koronadal would have to move to Surallah town which luckily is just 30 kilometers away.

“In fact your Honor, we monitored last night […] — I will also say that I saw the post of Congressman (Carlos) Zarate himself because I think they are known to each other, we understand he is an active member of the [NUPL] in Mindanao — and as soon as we saw that report we immediately informed our director for protection services about the incident,” Gascon said.

“We do our very best your Honor to respond as quickly as possible so we mobilized a quick response team the last night, unfortunately your honor because of budget constraints we do not have a presence on the ground in every municipality, barangay, or province your Honor, our offices are at regional level,” he added.

Nevertheless, Gascon assured that they would be getting a report from their Koronadal office about the initial details of what has happened.

“And so we informed our regional office based in Koronadal about this and we will find out from our Koronadal offices what the progress is in terms of responding to this unfortunate incident which has highlighted by the honorable congresswoman is another member of the legal profession that has been assaulted,” he explained.

Reports from local police shared by Philippine National Police (PNP) chief Gen. Guillermo Eleazar showed that that Macababbad was opening the gate of his home in Surallah’s Barangay Poblacion on Wednesday when three still unidentified individuals gunned him down.

All suspects escaped through a motorcycle.

Earlier, Eleazar also said that he has directed directed the regional director of the Police  Regional Office – 12 (PRO-12) to focus on the incident, to ensure that justice would be served for Macababbad and his bereaved relatives.

According to the NUPL, Macababbad was getting death threats prior to the attack, speculating that the killing is connected to his work as a lawyer for the people.

Gascon noted that they are looking into other attacks on people within the legal profession, especially as both the Supreme Court and the Integrated Bar of the Philippines (IBP) have expressed concerns about the rising killings of lawyers and judges.

He added that they have been trying to provide protection services for witnesses who may come out — indicating that it is a critical part of their budget.

“One thing we are able to do very well your Honor is to work closely with victims’ groups and provide witness protection facilities for them.  That’s the other thing your Honor that is critical in the budget, the continuing support that is necessary for witness protection and preservation of evidence,” Gascon explained.

During their presentation, CHR said that they asked the executive branch for a P1.614 billion budget for 2022, but only got P867.2 million for the proposed national expenditures program.  Much of the deductions were done on the personnel salaries, which went down from P1.067 billion to P541.9 million.

All in all, budget deductions totaled to P747.2 million.

Read Next
Total number of registered voters now at 62 million — Comelec
EDITORS' PICK
Disease expert: Omicron variant may behave like Delta
Palace: Malls, establishments may require customers to use of face shields
This new condo in the South will make you want to turn a new leaf
Smart offers wireless fiber-like speeds to Filipino homes with country’s first 5G Prepaid Home WiFi
Syringes for Pfizer vaccine arriving on December 2 — NVOC chairperson
Legarda: Ending Violence Against Women, a cause for all
MOST READ
Bongbong Marcos to face another disqualification case
Christine Bersola, Julius Babao cleared of cancer after colonoscopy, endoscopy
A Merry Bongbong
Isko Moreno ‘hopeful’ of getting Duterte’s backing as Bong Go withdraws
Don't miss out on the latest news and information.