DPWH grilled on alleged use of P10.3B funds to build pools, museums 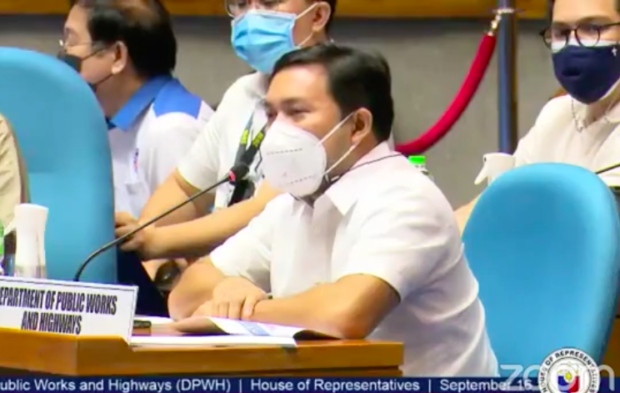 DPWH Sec. Mark Villar answers questions from congressmen during budget deliberations for his department. Screengrab from House of Representatives livestream

MANILA, Philippines — Did the Department of Public Works and Highways (DPWH) use P10.3 billion contingency funds, supposedly for COVID-19 response, to create structures such as swimming pools and museums?

This was the question posed by Bayan Muna Rep. Ferdinand Gaite on Thursday during the budget deliberations on the proposed P686.11 billion budget of the DPWH for 2022.

“According to our former congressman Neri Colmenares of Bayan Muna, based on the listings of the projects, apparently there where sports facilities, swimming pools, cruise sport, convention center, a museum, and I do not know what this is: a batcave, were the products of the P10.3 billion. Can the good secretary confirm or deny this?” Gaite asked.

In response, Public Works Secretary Mark Villar said that he will send a list of the projects covered by the funds. He did not confirm nor deny Gaite’s inquiry.

“The DPWH has a very wide scope of projects that we implement ranging from tourism, to assisting our soldiers with their infrastructure needs, to Department of Trade and Industry… kumpleto po,” Villar  said.

Villar continued: “I stand by our infrastructure programs and I feel that in the end, ang importante talaga ay maka-generate tayo ng trabaho.”

But Gaite questioned the urgency of the projects, if they were indeed true, especially as the country continues to grapple with the coronavirus pandemic.

“These mysterious funds including the mysterious entries in the SARO (state allotment release order) including the projects, gives rise to the suspicion that again this is plain and simple pork barrel funds,” Gaite said.

Some P10.3 billion “savings” from discontinued projects which were supposedly for COVID-19 response were reportedly transferred to the DPWH and used to fund infrastructure projects.

A trace of the documents showed that the DBM issued a SARO dated July 14, 2020, for P10.3 billion in favor of the DPWH to fund 344 public works projects across the country.