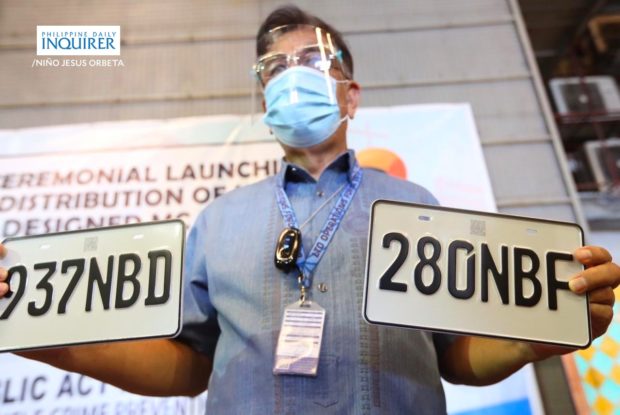 MANILA, Philippines — The Land Transportation Office’s (LTO) proposed 2022 budget for the production of around 18 million motorcycle plates was not approved by the Department of Budget and Management (DBM).

LTO chief Edgar Galvante disclosed this Wednesday during the House hearing on the proposed budget of the Department of Transportation (DOTr).

(Our problem right now is the motorcycle plates. Based on LTO’s projection,  we would need 18 million plates until June 30, 2022. While we asked for funding, unfortunately, we were not granted the budget.)

Galvante said the LTO has so far produced 3.6 million motorcycle plates in accordance with Republic Act No. 11235 or the Motorcycle Crime Prevention Act which requires bigger, readable, and color-coded number plates and identification marks.

(We wish to have the shortage contracted out because our plants’ capacity cannot accommodate the bulk of motorcycle plates.)

(We are asking for Congress’ help for this budget to be given to us.)

Galvante, nonetheless, assured that there are no backlogs for plates of four-wheeled vehicles.

(We are up to date with number plates for four-wheeled vehicles. We have covered vehicles registered from July 2016 up to the present.)

(If there is a new vehicle that does not have new plates yet, they can coordinate with their dealers because it’s likely the plates are already with the dealers.)

Galvante, however, noted that there are some issues with the release of replacement plates for older vehicles.

The Commission on Audit (COA) earlier called out the DOTr for failing to deliver over 8.12 million license plates worth P2.1 billion to vehicle owners.

In its 2020 audit report, the COA said this “deprived the registrants of their right to receive the plates they paid for and affected the efficient apprehension of traffic violators.”