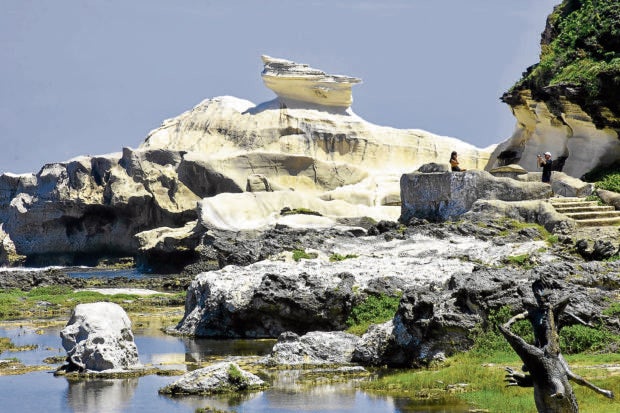 THE ROCK: Local tourists must wait for restrictions to ease to revisit the Kapurpurawan rock formation in Burgos, shown in this file photo, as the town has yet to be included in areas in Ilocos Norte province allowed to resume tourism activities. But Ilocos Norte’s top beach destination, Pagudpud, has reopened to visitors from other towns subject to health protocols. —WILLIE LOMIBAO

LAOAG CITY, Ilocos Norte, Philippines — After being closed for several months due to strict quarantine curbs amid COVID-19 outbreaks, Ilocos Norte has again allowed residents to travel within the province starting Wednesday to revive its ailing tourism industry, officials said.

In an advisory on Tuesday, the Ilocos Norte tourism office said leisure travel to at least 18 areas in the province under general community quarantine (GCQ), the second least restrictive containment classification in the country, would be exclusive for locals.

The cities of Laoag and Batac, and the towns of Bangui, Burgos, and Marcos will remain under modified enhanced community quarantine (MECQ), the second most restrictive quarantine classification.

Ilocos Norte’s tourism sites had been closed since Aug. 16 when most towns and cities in the province were placed under the most stringent enhanced community quarantine. Pagudpud, one of the top tourism destinations in the province, shut its doors to tourists as early as July 23.

The province is under GCQ with heightened restrictions until Sept. 30, which means that travelers from Metro Manila, which is one of its top tourist markets, are still barred from entering.

In an executive order, Gov. Matthew Marcos Manotoc, opened all parks and recreational spaces to the public in GCQ areas, subject to the 50-percent venue capacity directive of the Department of Tourism.

Residents of all ages who have no underlying health conditions and COVID-19 symptoms or exposures would be allowed to visit these tourism sites in GCQ areas, Manotoc said.

Residents living in areas under MECQ should also present a negative antigen test result taken within 48 hours before visiting tourist destinations in the province.

Known for its beaches, heritage sites and sand dunes, Ilocos Norte had been drawing about 2.1 million tourists during the peak season from January to May before the pandemic.

The local tourism industry had also absorbed at least P17.8 billion losses due to the travel restrictions.