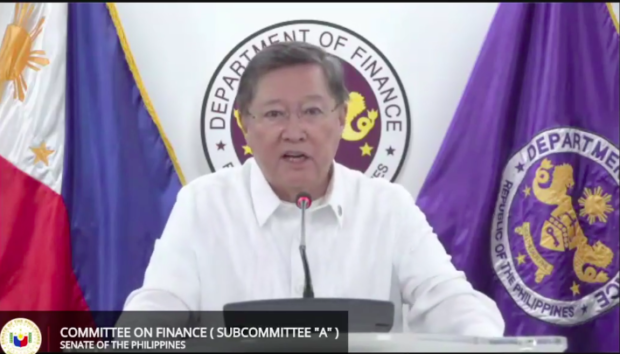 Finance Secretary Carlos Dominguez III during the Senate’s deliberation of the DOF’s budget for 2022. Screengrab from Senate livestream

MANILA, Philippines — The proposal to abolish the controversial Procurement Service of the Department of Budget and Management (PS-DBM) and the Philippine International Trading Corporation (PITC) is “worth looking at,” Finance Secretary Carlos Dominguez III said Wednesday.

PS-DBM is, of course, under the budget department, while PITC is an attached agency of the Department of Trade and Industry.

Dominguez, who heads the government’s economic development cluster, however said that he had not yet been presented with a proposal for the abolition of either of the agencies concerned.

“So at this point in time, I could not express an intelligent opinion. However, I believe it’s worth looking at,” Dominguez said during a hearing by the Senate Committee on Finance on the proposed 2022 budget of the Department of Finance (DOF).

“I think all agencies in government—all agencies—should be regularly reviewed for possible abolition, in the same way that we do in the GCG which is the Governance Commission on GOCCs (government-owned or-controlled corporations). So I think it’s a good idea to review all government agencies,” he added.

Dominguez was responding to the question of Senator Imee Marcos on the DOF’s opinion on the proposed abolition of the PS-DBM and PITC when he made this remark.

“I just filed a bill abolishing both [PS-DBM and PITC] and I was hopeful the DOF will have a look at it so we can rightsize,” Marcos then responded. Dominguez said he will take a close look at the bills filed by Marcos on the matter.

The senator earlier filed separate measures seeking to abolish both the PS-DBM and PITC to address the “systemic corruption” in these agencies.

In filing the bills, Marcos noted that the mandate of PS-DBM became “archaic and irrelevant” while PITC has weakened with the passage of Republic Act No. 9184 or the Government Procurement Reform Act, which already strengthens the procurement service of national government agencies.

Marcos filed the bills as the PS-DBM finds itself in hot water over the purchase of allegedly overpriced medical supplies on behalf of the Department of Health in 2020.

The senator, meanwhile, also cited issues hounding the PITC such as the P11.02 billion funds transferred by various government agencies from 2014 to 2020 but remained unutilized as of December last year.