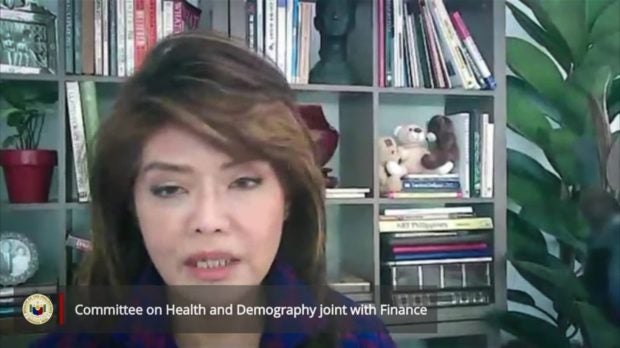 Sen. Imee Marcos, during Monday’s virtual hearing of the sub-committee of the Committee on Banks, Financial Institutions and Currencies. (Screen grab/Senate PRIB)

MANILA, Philippines — Senator Imee Marcos has filed separate measures seeking to abolish the Department of  Budget and Management-Procurement Service (DBM-PS) and the Philippine International Trading Corporation (PITC) to address the “systemic corruption” in the two  agencies.

Both DBM-PS and the PITC, an attached agency to the Department of Trade and Industry, were created during the time of the senators’ father, the late President  Ferdinand Marcos.

According to the senator, the mandate of PS-DBM became “archaic and irrelevant” while PITC has weakened with the passage of Republic Act  No. 9184 or the “Government Procurement Reform Act,  which already strengthens the procurement service of national government agencies.

“The DBM-PS has become a fertile breeding ground of graft and corruption and, as such, should be abolished as it has outlived its functions to the national government,” she said when she sought the   DBM-PS abolition through Senate Bill No. 2388.

“In addition to its mandate being affected by changes in national policies and legislation, the DBM-PS have dealt with issues regarding the exercise of their mandate in the previous years,”  the senator  added.

She cited in particular  the  recent controversies surrounding the Department of  Health’s  transfer of  P42 billion to  the DBM-PS  for the procurement of face shields, face masks, personal protective equipment, and other pandemic-related purchases.

“This bill seeks to address the systemic corruption in the DBM-PS by abolishing the said agencies,” Sen. Marcos further said.

In lieu of the abolition of the DBM-PS, her bill provides that the respective departments, agencies, Government Owned and/or Controlled Corporations (GOCCs), State Universities and Colleges (SUCs), and Local Government Units (LGUs) shall, thereafter, undertake  the procurement of common-use supplies, materials and equipment.

In the case of PITC, the senator  explained that the agency was “originally crafted as a mechanism to formalize trade with planned economies through government-to-government procurement.

“However, as of today, only two centrally planned economies are in existence, which are Cuba and North Korea,” she said  in Senate Bill No. 2389 seeking the abolition of  the PITC.

“The Philippines has also moved away from government-to-government trade, as exemplified by the passage of Republic Act No. 11203 or the “Rice Tariffication Law” on 14 February 2019, among others.”

Like the DBM-PS, the senator also cited  issues hounding the PITC such as the P11.02 billion funds transferred by various government agencies from 2014 to 2020 but remained unutilized as of December last year.

“There are reports of source agencies using the interest of money transferred to the PITC to generate savings, which are used by the source agency to fund bonuses, among others,” she also said in the bill.

“Thus, this bill seeks to address the systemic corruption in the PITC by abolishing the said agency,” Sen. Marcos said.