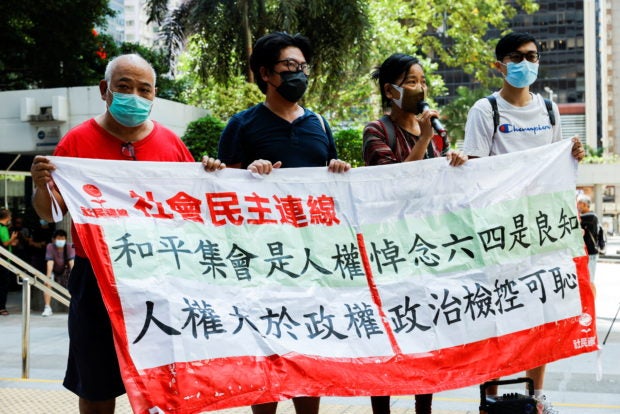 Pro-democracy activists shout slogans outside the court to support activists charged for participating in the assembly on June 4 to commemorate the 1989 crackdown on protesters in and around Beijing’s Tiananmen Square, in Hong Kong, China, September 15, 2021. REUTERS/Tyrone Siu

HONG KONG — Nine Hong Kong pro-democracy activists were sentenced to between six and 10 months in prison on Wednesday for taking part in an unauthorized assembly at last year’s vigil for the victims of China’s 1989 Tiananmen Square crackdown on protesters.

The former British colony, which returned to Chinese rule in 1997 with the promise of wide-ranging freedoms, traditionally holds the largest June 4 vigil in the world.

But, the last two vigils were banned by police citing coronavirus restrictions on public gatherings. But coming after the mass pro-democracy protests in Hong Kong in 2019, the ban was seen by many activists as an attempt to shut down any display of defiance to Beijing. Hong Kong authorities denied that was the reason.

Despite the ban, thousands turned up to light candles across the city in 2020, and smaller crowds did the same in 2021.

“They wrongly and arrogantly believed their common purpose was more important than protecting the community or the public’s right to protection from a serious health risk.”

Last week, police arrested members of the Hong Kong Alliance in Support of Patriotic Democratic Movements in China, the organizer of the vigils, under national security legislation imposed by Beijing last year. Police accuse the Alliance of being an “agent of foreign forces,” which the Alliance denies.

Alliance leaders Albert Ho, Lee Cheuk-yan, and Chow Hang Tung were charged last week with inciting subversion. Ho and Lee are already in jail for their role in the protests in 2019. Chow was denied bail.

The museum, which closed on June 2 due to an investigation by the Food and Environmental Hygiene Department into its licensing, reopened online as “8964 Museum” and now operates independently from the Alliance.